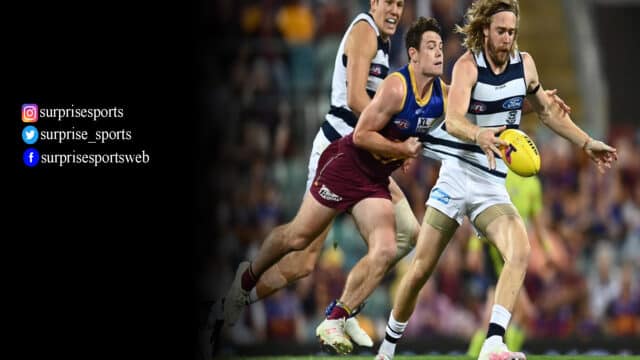 The preliminary final between Geelong and Brisbane will take place on Friday, 16 Sept. at 7:50 pm AEST. Geelong Cats will host the game at the ‘G.

Geelong Cats will be the favorites for this tie. They are on an incredible 14-match winning streak, which sees them finishing the regular season right at the top.

In the qualifying final, the Cats took care of the magpies in a nail-biter. They beat the Magpies by 78-72.

Elsewhere, Brisbane Lions finished the regular season at 6th on the ladder. They took care of Richmond in the qualifying final with a narrow victory of 106-104.

The Lions cruised past the defending premiers Melbourne Demons last week by 79-92 points at the ‘G. It will give them a lot of momentum before taking on Geelong at the same venue.

Geelong Cats are 2-1 up against Brisbane Lions in their previous three head-to-head meetings. Moreover, they won the only meeting this season in Round 4 by 10 points.

Geelong Cats are on an incredible run. They are on a 14-match winning streak. Moreover, the Cats boast the best defensive unit in the league. They have conceded an average of 64 points a game since round 15.

On the other hand, Brisbane Lions are deadly in their forward-stopping ability. It would be an eye-catching battle between the two.

Moreover, the Lions’ victory over the Demons last week by 79-92 points will work as shots to their arms. It will be an intriguing battle between the two as a spot for the premiership will be on the line.

Geelong met the Lions in Round 4 this season for a 10-point victory. Tom Hawkins kicked five goals. We predict Geelong will continue their winning streak.

How Can I Stream Geelong vs Brisbane Live AFL Match?