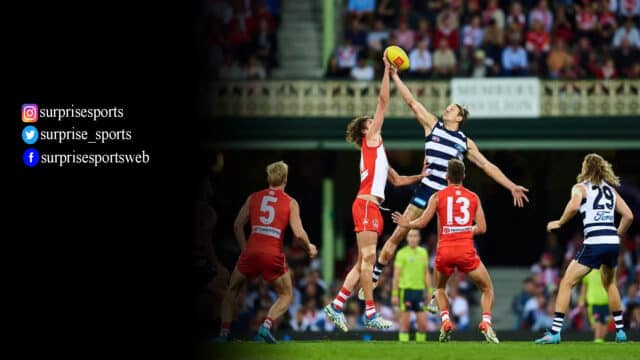 It all comes down to the AFL Grand Final as Geelong and Sydney lock horns on Saturday at MCG. The fans will be up for a treat as the two finest teams face off with the premiership on the line. Here we have Geelong Cats vs Sydney Swans, start time, preview, h2h, prediction, and how to watch the Grand Final on TV and Live Stream.

The Grand Final between Geelong and Sydney will take place on Saturday, 24 Sept. at 2:30 pm AEST. Geelong Cats will host the game at the ‘G.

The Geelong Cats have forgotten how to lose a match. They are on an incredible 15-match winning streak, which sees them finishing the regular season right at the top and cruising through to the Grand Final.

They began the finals series with a nail-biting 78-72 win over the Magpies. In the preliminary finals, the Cats showed a statement-making performance against Brisbane Lions to win by 71 points. They thrashed the Lions by 120-49.

Related
Western Crows foundation squad member Shane Leat, will take on the role of Captain for the AFL New Zealand Premiership side in 2023.

On the other hand, Sydney Swans are coming off a thrilling 95-94 win over the Magpies in the preliminary finals. They are on a magnificent 9-match winning streak and need one more to be the premiers.

The Swans finished the regular season 3rd on the ladder. They took care of last season’s premiers, Melbourne Demons, by 69-91 points to reach the preliminary finals.

Sydney Swans players that will play in The AFL grand final 2022 are:

Geelong Cats players that will play in The AFL grand final 2022 are:

Sydney Swans are 2-1 up against Geelong Cats in their previous three head-to-head meetings. Those two wins were in the SCG.

It would be a toe-to-toe battle between the two finest and in-form sides in the league. The Cats are on a 15-match winning streak. Moreover, they are fresh off a thumping 71-point victory over the Lions.

Likewise, the Swans are on a 9-match winning streak. They will go on all cylinders on Saturday to hold the premiership.

It would be difficult for the Swans in the MCG. Geelong’s last win proved that they are more solid in big games. We predict Geelong Cats will grab one more win to be the premiers.

How to Watch Geelong vs Sydney Live on TV and Stream Online?

You can stream AFL Grand Final live even if you live in the USA or other countries via a VPN.

Following these steps, you can unblock 7 Plus in your region and watch AFL Grand Final in the USA.

How many times has Geelong Cats won the AFL Grand Final?

Geelong Cats have been crowned The AFL champions nine times. They have also won 7 VFA Premierships. The Cats have been in the AFL and VFA finals 18 times in history. Let’s see if they will win The AFL 2022 finals against The Swans.

How many times has Sydney Swans won the AFL Grand final?

Sydney Swans have won The AFL Grand Finals10 times and VFA Premierships 5 times. The Swans will face The Cats in the finals this year for the first time in the AFL/VFA history. They have competed against each other in several league matches but never in the finals. So let’s see who will win this time.

Who won the most AFL Grand Finals in the Past?

Essendon and Carlton have won most AFL Grand Finals in the Past. They have been crowned The AFL champions 16 times. Collingwood has won 15 times; and has been in the finals 44 times, and Hawthorn has won 13 times. So let’s see who will win this year.

Related
AFL Grand Final 2022: How to Watch on Channel 7 and Online

Western Crows foundation squad member Shane Leat, will take on the role of Captain for the AFL New Zealand Premiership side in 2023.