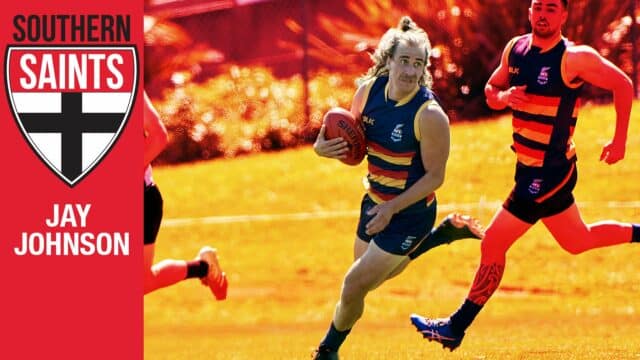 It was announced in September 2021 that Canterbury will be the new home for the Southern Saints for the 2022 AFL New Zealand Premiership, where Eastern Blues Captain Johnson was set to link with fellow Cantabrian, Andrew Howison and Southern Saints Captain, Andrew Howison. However, after the 2022 Season was cancelled, Jays highly anticipated move to the Saints was put on hold.

We were lucky enough to have a couple of training runs before the season got called off last year and the group we had was shaping up to be something pretty good so there’s no doubt that a lot of the same boys will be back and keen to have a crack at bringing home some silverware.

The 30-year-old had been a pivotal squad member for the Crows over the past six seasons with his endurance running, smooth ball skills and calm demeanor making him stand out in every game.

It’s been tough for a lot of players who didn’t get an opportunity to play at this level last year, especially in the new format of the competition, having teams represent regions now makes things a bit more juicy for the players and everyone involved.

The post Jay Johnson Ready To Debut For The Saints appeared first on AFL New Zealand.