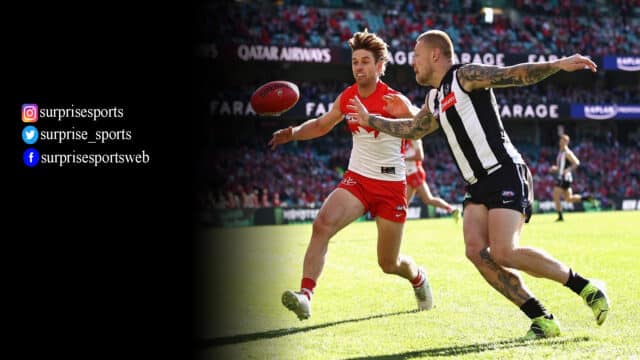 Sydney Swans and Collingwood Magpies will lock horns at SCG in an exciting preliminary final on Saturday. The fans are up for a treat as the two will battle for a spot in the premiership game. Here we have Sydney vs Collingwood, start time, preview, h2h, prediction, and how to watch on TV and Live Stream.

Everything to play for.

The preliminary final between Sydney and Collingwood will take place on Saturday, 17 Sept. at 4:45 pm AEST. Sydney Swans will host the game at SCG.

Collingwood Magpies finished the regular season with a defeat and a draw to finish 4th on the ladder. The Swans snapped their 11-match winning streak in Round 22 with a 27-point victory.

The Magpies started their finals series with a defeat against the ladder leader Geelong. However, they bounced back in the semi-finals to claim a 79-59 points victory over Fremantle.

On the other hand, the Swans will be high on confidence from their recent victories over Collingwood (Round 22) and Melbourne (Finals Series).

They are coming off a massive win over the last year’s premiers, Melbourne Demons, by 69-91 points. They are on an 8-match winning streak and try to go two more to hold the premiership.

Sydney Swans are 2-1 up against Collingwood Magpies in their previous three head-to-head meetings. Moreover, they won the only meeting this season in Round 22 by 27 points, breaking the Pies’ 11-match winning streak.

The Swans are on an 8-match winning streak, and it’s hard to see them losing in the preliminary finals. They showcased their offensive strength to begin the finals series against Melbourne Demons with a 69-91 victory. Moreover, the Swans will be far more confident in this game at SCG.

The last time they met, Collingwood got four cheap goals but couldn’t seal the match. They need to apply more pressure to win more turnovers.

It could be an intriguing battle at SCG and come down to the wires. However, the Swans are ahead in the fire powers up front. We predict the Sydney Swans will win this one.

How Can I Live stream Sydney vs Collingwood?