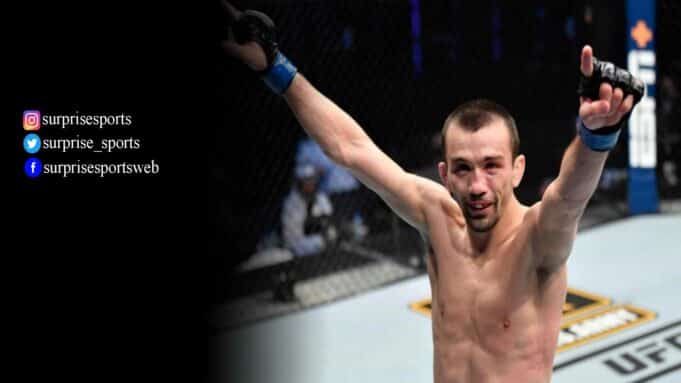 Askar Askarov is a Russian professional MMA fighter who has a net worth of $200,000. Here you will know Askarov’s net worth, earnings, early life, next fight, and more.

Askar Askarov is a Russian professional mixed martial artist and former ACB Flyweight Champion currently competing in the flyweight division of the UFC.

Askar Askarov was born in the Akhvakhsky District of Dagestan, Russia, on 9 October 1992. He was born deaf, but his hearing improved with time.

To date, he has not recovered fully; he can’t even hear the calls given by his corner in the MMA fight.

He also won a gold medal at Deaflympics in Samsun, Turkey, in 2017 for his country Russia.

Askarov’s net worth in 2023 is estimated to be around $200,000. According to various reports, he has made most of his net worth from his MMA career.

He is currently ranked number three in the UFC’s flyweight division with an MMA record of 14-1-1.

His highest payday was at UFC Fight Night: Blaydes vs. Daukaus. When he defeated Kai Kara France, he made a total of $86,000 from this fight.

According to various sources, Askarov’s career earnings are around $1,87,000. His biggest paydays are yet to come in the future.

On January 18, 2020, Askarov defeated Tim Elliott by a unanimous decision. The card was headlined by Conor McGregor & Donald Cerrone.

As of September 2022, Askar Askarov is number four in the UFC’s Flyweight division.

As of September 2022, Askar Askarov’s MMA record is 14-1-1. He is still actively competing in the UFC’s flyweight division, so his record is set to improve with time.

After his successful run in Absolute Championship Berkut, He was signed by the UFC in 2019.

He made his UFC debut against Brandon Moreno. Unfortunately, the fight was called a draw by a split decision.

On January 18, 2020, at UFC 246, He fought his second fight in the UFC against Tim Elliott. He won this fight by unanimous decision.

How much is the net worth of Askar Askarov in 2023?

How old is Askar Askarov?

Askar Askarov is from where?