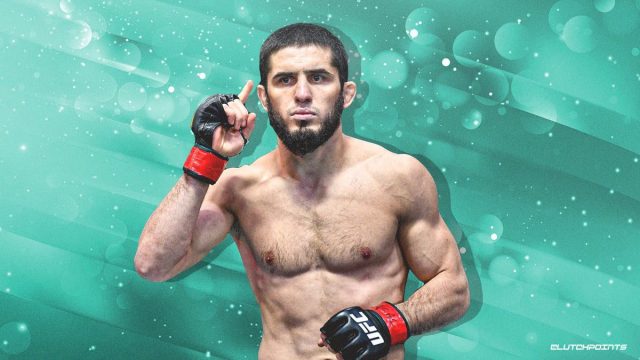 Islam Makhachev is a professional Russian MMA fighter. He used to be the Sambo superstar. But now Makhachev is completely devoted his career to the UFC. He competes in the lightweight division.

As of November 2021, Makhachev was ranked 4 in the world UFC lightweight division. From his extraordinary skills in the fight ring, he has made a huge fan base from all around the world.

Here we prepare an article for the fans of Makhachev. Here we will discuss the net worth of Makhachev, his salary, age, height wife, and all the recent news, rumor facts about Makhachev.

Makhachev started his professional MMA career in 2011. He had his first fight against Tengiz Khuchua which was on February 12. Makhachev won his very first match via knockout in the first round. His promoter knew at that moment that soon this boy will be the most dangerous fighter in UFC.

At M-1 Challenge 38, Makhachev stepped into the ring for his second fight against Mansour Barnaoui. He again won that match via unanimous decision. At M-1 Challenge 41 on August 21, 2013, Makhachev faced one of the most dangerous fighters at that time, Brazilian Jiu-Jitsu black belt Rander Junio. Junio was an undefeated champion at that moment. Makhachev broke the record of Junio and won the game by unanimous decision.

His next fight was with Yuri Ivlev and won that by submission via armbar. On September 7, 2014, Makhachev had his last fight for the M-1 promotion. He was set to face Ivica Truscek. Makhachev also won that game via submission in the third round.

And after that, Makhachev started his career in UFC. He signed a deal with UFC on October 2, 2014, for four fights. In that four-fight series, Makhachev had his first professional loss. He was fighting against Adriano Martins at the UFC 192. And Martins won that match via knockout in the first round.

In 2016 Makhachev had a deal to fight with Andrew Martin Dober in the UFC on Fox 19. But in the weighing time, Makhachev was found positive of using a banned drug anti-ischemic medium. So, the board canceled the match and Makhachev was suspended. But after two months, USADA withdraws the suspension from Makhachev.

In 2016, Makhachev won the gold medal in the World Combat Sambo Championship. In the final bout against Valentin Benishev, Makhachev won by a 7-0 record. Makhachev total played 22 matches in professional MMA and lost only in one match.

Makhachev aged 30 years old. He was born in Makhachkala. Then it was the part of Dagestan Autonomous Soviet Socialist Republic, the Soviet Union. Now it’s the Republic Of Dagestan, Russia.

Islam Makhachev’s Net Worth and Salary:

Makhachev is one of the brightest and youngest fighters in UFC. He grew up and trained with the legendary fighter Khabib Nurmagomedov. Besides making huge fan followers from all around the world, Makhachev has also made a large amount of money from his career. According to First Sportz, Makhachev’s net worth is about $650,000. He has earned around $576,500 from his UFC fighting career till now. And Makhachev’s most singles earning at a time came from his last fight with Thiago Moises, where Makhachev earned $116,000.

Is Makhachev a married person or not can’t be told for sure. But in recent days, we got some proof and videos that look like the wedding day of Makhachev. According to many videos and internet information, Makhachev is a married person. He got married in 2021. Though he never talked about it in public or give direct answers to our interviewer. Many other celebrities were spotted at his wedding video like Khabib Nurmagomedov, Zubaira Tughukov, and others.

Makhachev last fought against Dan Hooker on October 30, 2021. And Makhachev’s next fight is scheduled for February 27, 2022, against Dariush.

Who is Scott Stallings? His Net Worth in 2022, Salary, PGA Earnings