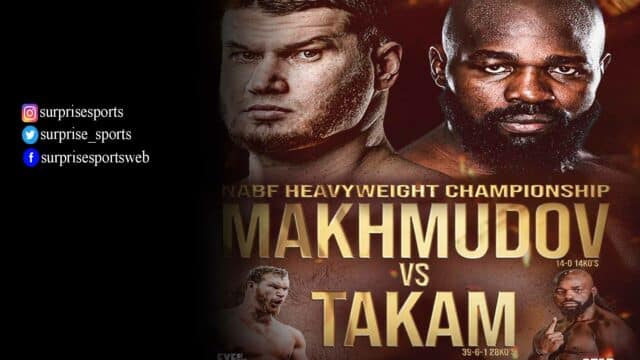 Arslanbek “Lion” Makhmudov is set to confront Carlos Takam on Friday, September 16, at Montreal Casino in Montreal. The fight will take place in the Heavyweight division over 10 rounds, with no weight limit. Read the article to know the start time, venue, prediction, and how to watch and live stream the Makhmudov vs Takam event online.

Arslanbek Makhmudov is a professional boxer from Russia. Since 2019, he has held the WBC-NABF heavyweight belt. He will enter the arena with a perfect record of 14 victories, 0 defeats, and 0 draws. All of these victories were by knockout.

Carlos Takam is a French professional boxer of Cameroonian origin. He has been contending for the unified WBA (Super), IBF, and IBO heavyweight titles since 2017. He will enter the arena with 39 victories, 6 losses, and 1 draw. 28 of those victories were by knockout.

Carlos Takam has defeated three of his previous five opponents. He was defeated by Joe Joyce via technical knockout in the sixth round on July 24, 2021, at the SSE Arena in Wembley. Makhmudov, on the other hand, has been unbeaten throughout his career. On February 19th, he defeated Mariusz Wach via a 6-round TKO in Montreal Casino.

Date: The “Makhmudov vs Takam” boxing event is scheduled for Friday, September 16, 2022.

Time: The boxers are scheduled to enter the ring around 2:00 AM UTC. It will be 10:00 p.m. EST, 7:00 p.m. PST on the West Coast of America, and 3:00 a.m. BST in the United Kingdom. Please be aware that these schedules are subject to change at the management’s sole discretion.

Makhmudov is a huge Russian heavyweight fighter. He had an impressive start to his professional career. His most recent fight was by far the longest and lasted only six rounds. It lasted so long because of Mariusz Wach’s seasoned boxing skills.

Takam, on the other hand, is a 41-year-old veteran fighter. He has fought several excellent fighters over the last decade and deserves all the accolades he can receive. But he will be facing a difficult battle as he is up against a huge opponent who is younger and more energetic than him.

According to our analysis of their previous fights, Makhmudov has a 95% chance of winning the fight against veteran boxer Takam.

How Can I Watch and Live Stream Makhmudov vs Takam?

ESPN holds the exclusive rights to broadcast and digitally distribute the event. As such, it will be broadcasted live via the ESPN channel. Additionally, ESPN+ will live stream the Makhmudov vs Takam fight in the USA.

Keep an eye on our website for the latest information on the upcoming event and other boxing news.