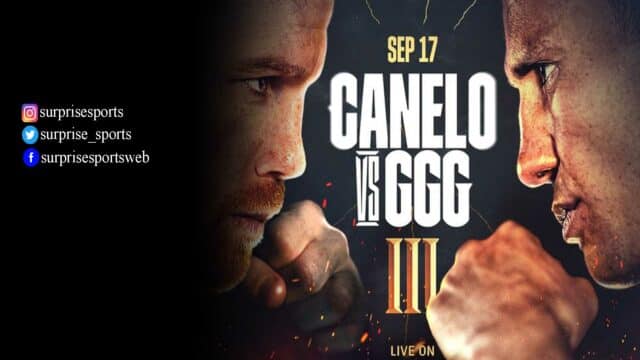 Canelo Alvarez will lock horns with Gennadiy “GGG” Golovkin on Saturday inside T-Mobile Arena for the third time in their career. Canelo’s undisputed super middleweight title will be on the line in the DAZN pay-per-view Canelo vs GGG 3. Here we have the start time, main event ring walks, main cards, and PPV price.

Canelo Alvarez and Gennadiy Golovkin met for the first time in 2017 inside T-Mobile Arena. The bout ended in a controversial split decision draw.

The two met again at the same venue a year later. But the initial date was delayed due to Canelo being tested positive for the banned substance clenbuterol. However, Canelo clinched victory via a majority decision. It will be the third match between Canelo and GGG and again inside the T-Mobile Arena in Las Vegas.

What Happened at the Press Conference?

What Happened in Their Last Fight?

Canelo and GGG last fought in September 2018. The bout went the distance and ended with an embrace between the fighters, bleeding from cuts above their eyes.

To the shock of many viewers, judges Dave Moretti and Steve Weisfeld scored 115–113 in favor of Canelo, while judge Glenn Feldman scored it as a 114–114 draw.

Canelo Alvarez (57-2-2) made his pro debut in 2004. The 32-year-old Mexican has reigned across four divisions. He has beaten the likes of Shane Mosley, Josesito Lopez, Miguel Cotto, and Amir Khan.

However, Canelo lost to Floyd Mayweather in 2013. After that defeat, he bounced back with 15 wins and a draw. Canelo became the undisputed unified super middleweight champion in just 11 months. His last win was over IBF super-middleweight champion Caleb Plant last November.

However, Canelo lost his last match in May in the light heavyweight category against Dmitry Bivol. It was a unanimous decision defeat.

Golovkin beat the likes of David Lemieux, Kell Brook, and Daniel Jacobs before facing Canelo in 2017. Since 2019, he has been on a 4-match winning streak. GGG won the IBO and IBF middleweight titles against Sergiy Derevyanchenko in 2019.

After two years of break, the 40-year-old won the WBA super middleweight title in April, a TKO win over Ryota Murata.

GGG suffered the only defeat in his career against Canelo. He would be up for revenge.

The DAZN PPV event will take place inside T-Mobile Arena in Las Vegas. The venue can hold up to 20,000 viewers.

How Can I Live Stream Canelo Alvarez vs Gennadiy Golovkin 3 Tonight?

DAZN is the only place to stream Canelo vs GGG 3 in the United Kingdom. The service + iPPV costs £17.98 for new subscribers and £9.99 for existing members.

Canadian boxing fans can also watch Canelo vs GGG 3 live on DAZN. Existing subscribers will pay CAD $64.99, while new subscribers will tack on their first month’s membership to get in the door, paying CAD $89.98.

DAZN is also offering the event down under. Existing subscribers will just pay the iPPV price of AU $44.99, while new subscribers’ fees total AU $58.98.

The card begins at 10 a.m. AEDT and the main event should be at around 1 p.m.

The rematch between Canelo Alvarez and Gennadiy Golovkin will be a DAZN pay-per-view main event. It means fans need to buy the fight to watch live.