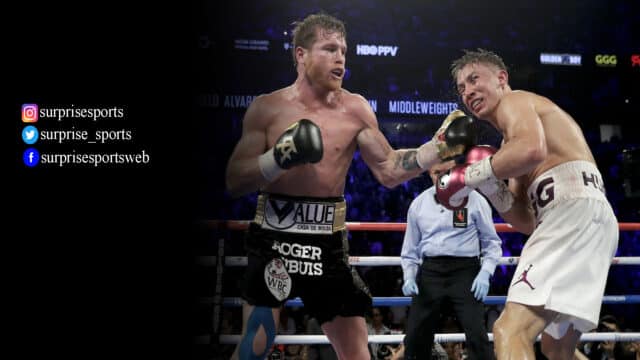 Canelo Alvarez will fight against Gennadiy “GGG” Golovkin on 17 September inside T-Mobile Arena for the third time in their career. Canelo’s undisputed super middleweight titles will be on the line as the two greatest boxers of this generation square off. Here we have Canelo vs GGG 3 purse and salaries.

The knockout king Golovkin suffered his only defeat against Canelo in his illustrious 16-year boxing career. It will be another epic battle between the two greatest boxers of the ages. Moreover, Canelo and GGG will be up for a jaw-dropping payday.

How Much Will Canelo Alvarez Earn Tonight?

The 32-year-old Mexican will earn a base salary of $10m for his fight against GGG on 17th Sept. As the undisputed and unified super middleweight champion, PPV and sponsorship bonuses will come flooding in for Canelo. He is expected to take home a jaw-dropping $65m when it’s all said and done.

According to Celebrity Net Worth, Canelo Alvarez earned $40m for his first fight against Golovkin and $30m in the rematch in 2018.

How Much Will GGG Earn Tonight?

Gennadiy Golovkin will earn a base salary of $8m for this third match against Canelo on 17th Sept. 2022. Including the huge PPV and sponsorship bonuses, GGG is expected to pocket a lucrative $43m.

GGG’s base salary is double what he earned in his rematch in 2018.

Who is Canelo Alvarez?

Canelo Alvarez is a Mexican professional boxer. He is a three-time champion and has won several world championships. The Unified ‘World Boxing Association (WBA) Super,’ ‘World Boxing Council (WBC),’ and ‘The Ring Championship’ are among them.

Alvarez’s net worth will be over $180 million in 2022. He is reportedly one of the top 5 richest boxers worldwide. In his recent losing bout against Dmitry Bivol, Alvarez earned around $15 million. He earns $2 million annually from only endorsement deals.

Gennady Golovkin is a Kazakhstani professional boxer. He has held multiple world championships in the middleweight division throughout his career.

GGG’s net worth will be $30 million in 2022. In 2019, he signed a six-fight deal with DAZN worth $100 million. From his upcoming fight against Alvarez, he is expected to take home $8 million as a guaranteed purse.

The DAZN PPV event will take place inside T-Mobile Arena in Las Vegas. The venue can hold up to 20,000 viewers.