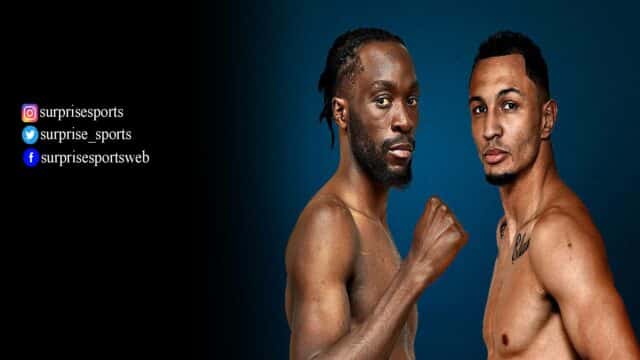 Denzel Bentley, the British Middleweight Champion, will defend his title against Marcus “Sweet MNM” Morrison at York Hall on Friday, September 16. Read the article to know the start time, venue, prediction, and how to watch and live stream the Bentley vs Morrison fight online.

Denzel “2Sharp” Bentley is a professional boxer from England. He currently holds the British middleweight belt. Previously, He had held the title for a year before relinquishing it in 2021. He then reclaimed the title in May of this year. Bentley has a professional boxing record of 16 wins and 1 loss from 18 fights.

Marcus “Sweet MNM” Morrison is an English professional boxer. He held the WBC International Silver Middle champion title in 2019. Morrison will compete for the British middleweight title in his upcoming fight. He has a professional boxing record of 25 wins and 5 losses from 31 fights.

Defending champion Bentley is now revved up and ready to go again against Morrison. Conversely, Morrison is back at middleweight after trying his luck at 168lbs in a challenge for the WBO International title held by Zach Parker in November last year. Queensberry Promotions will be promoting the event owned by Frank Warren.

Date: The “Bentley vs Morrison” boxing event is scheduled for Friday, September 16, 2022.

Venue: The event will take place at the “Home of Boxing,” aka York Hall in Bethnal Green, London.

Bentley is undoubtedly the more dangerous combatant in the upcoming match. He unleashes a barrage of punches and combos when he gains momentum in the ring. Morrison, on the other hand, has a more static game plan. He recently lost to a regional opponent due to a lack of response and power. As a result, Bentley will undoubtedly be the popular favorite in the matchup. According to our calculations, Denzel Bentley has a 98% chance of overcoming his opponent, Marcus Morrison.

How to Watch and Live Stream Bentley vs Morrison

The event will be broadcasted by “BT Sports 1”. It will start broadcasting at 7 p.m. GMT and run till 12 a.m. GMT. Additionally, the Bentley vs Morrison will be live streamed on the BT Sport website and app.

Keep an eye on our website for the latest information on the upcoming event and other boxing news.