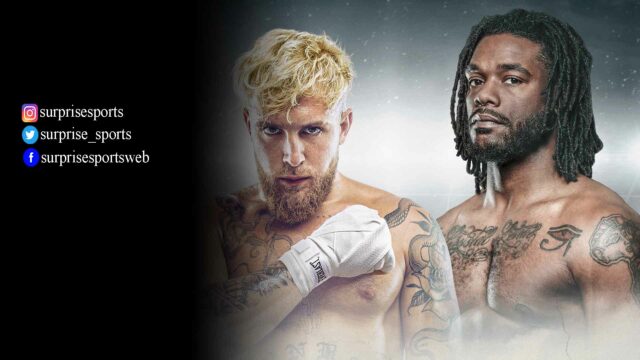 Jake Paul will be fighting against Hasim Rahman Jr. on August 6. Paul’s organization was under a lot of pressure to find a substitute opponent when Tommy Fury was forced to withdraw from the bout due to problems with his visa.

Hasim Rahman Jr. will take the place and fight Jake Paul in this fight. He is larger and has more experience than Paul.

The fighters will get a good amount of purse from the fight. here, you will know Jake Paul vs. Hasim Rahman Jr Purse.

Paul’s most recent fight was against Tyron Woodley in December 2021. This is considered the biggest fight of his career, and he also earned a huge salary from the fight.

It has not been confirmed how much money was on the line for the first battle between Paul and Woodley, but it is speculated that the former UFC welterweight champion made at least $4 million

He earned a guaranteed purse of $1.5 million from the fighting bout. The another $2.5 million he received from the 70% PPV share.

Jack Paul is expected to receive a guaranteed purse of $1.5 million from the fight against Rahman JR. He will also get a 60-70% PPV share of the fight.

This will be the biggest fight for Hasim Rahman Jr. He is expected to earn $500,000 from his fight against Paul. He may make the biggest payout from a single fight in his career. The fighter will also get 30-40% of the PPV share.

We all know that Jack Paul offers extra money if the opponent can beat him in the bout. He declared a $500,000 bonus for Tyron Woodley.

When is Paul vs. Rahman?

Date: The fight will be held on Saturday, August 6.

Start time: The fight is expected to start at 9 p.m. ET

The fight of Jake Paul vs. Hasim Rahman Jr will is shown on Showtime PPV. The price of the PPV is not announced yet, we will let you know as soon as the price is announced. You will be able to watch the fight on your streaming device.

Top 10 Best Boxers of All Time

Joshua and Fury fight set for 2022