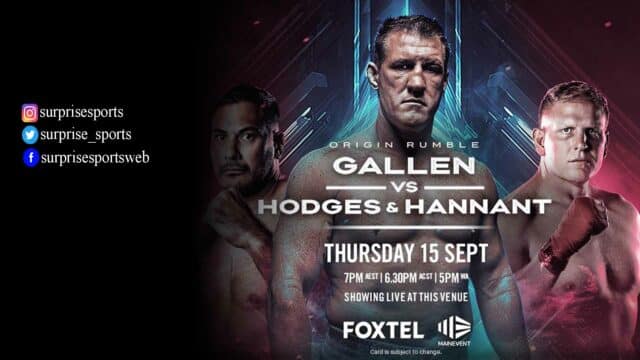 Surprise Sports has all the information you need to watch #OriginRumble.

The Origin Rumble will go underway at 6:00 pm before the pay-per-view main cards start at 7:00 pm. The ring walk for the main event between Gallen vs Hodges and Hannant will be at 9:00 pm (approx.) for the first fight. It’s still unknown Gallen’s first opponent. The audience will discover it during the ring walks. The main event start time depends on how long the undercards go.

The former NRL premiership-winning skipper and New South Wales’ Paul Gallen will take on the Maroons’ greats Justin Hodges and Ben Hannant on the same night. The viewers will be up for a treat as the main event will bring the NSW and Queensland Maroons rivalry into the boxing ring.

Paul Gallen is on an impressive 12-2-1 record. He knocked out his opponents seven times. However, it will be his first bout since a decision defeat against Kris Terzievski in May.

Among his two opponents, Justin Hodges looms as a great threat. Hodges is on a 5-1-0 record. The 40-year-old has conflicted with Gallen for a long time. Finally, the two will battle it out in the boxing ring.

On the other hand, Ben Hannant is expected to be an easy opponent for Gallen. Hannant played his only match in June for a KO defeat against Hodges.

Paul Gallen will fight four two-minute rounds in each fight. He will get at least an hour of rest between the games.

Gallen vs Hodges & Hannant will also feature exciting undercards. The co-main event between Harry Garside and Miles Zalewski has been suspended due to the former’s hand injury. Zalewski (11-2-0) will now take on Shiva Mishra (8-6-0).

Here are the Main Cards of the event

How to Watch Gallen vs Hodges and Hannant Live

You can live stream the Gallen vs Hodges and Hannant on Kayo in Australia. It will also be available on Fox Sports and Main Event. Tune in to Fox Sports 3 at 6:00 pm AEST to watch the actions. You can buy the Kayo PPV here.

PPV Price: How Much Does the Fight Cost?

The main event between Gallen vs Hodges and Hannant is a pay-per-view fight. Fans must count $59.95 to purchase the main cards through the Main Event. Kayo will cover the match live for the pay-per-view viewers.

Gallen vs Hodges and Hannant: Purse Payouts and Salaries

No official statement is publicized regarding the purse of the event. However, Surprise Sports has extensively analyzed the previous bouts of Gallen, Hodges, and Hannant. With the help of analysis and research, we have come up with an estimated Purse.

How Much Will Paul Gallen Earn From the Fight?

Per our analysis, Paul Gellen will make at least $1.3 million for his two fights this Thursday from the total purse.

Paul Gallen is a prizefighter. As a massively popular personality in Australia, he pulls huge numbers in PPVs. This reflected well in his fight purses. For his fight against the 22-year-old Justis Huni last year, Gallen is reported to make $1.1 million.

The former vice-captain of Australia is now on the brink of making history, fighting two opponents in one night. The hype among boxing fans is huge for this event. With the guaranteed purse and PPV bonus, the total payout should be around $1.3 million.

How Much Will Ben Hannant and Justin Hodges Earn From the Fight?

It is confirmed that both Ben Hannant and Justin Hodges will be making $100,000 as a guaranteed purse.

According to reports, there is a rematch clause in the fight contracts of both Hannant and Hodges. If any of them beat Gallen in the fight, the rematch clause will activate with a payout of $1 million to the winner in the rematch. In addition, Gallen declared that he would give $50,000 from his purse to whoever managed to beat him on Sept 15.

Who is Paul Gallen?

Paul Gallen is an Australian professional boxer. He is a former rugby league footballer who previously captained the NRL club, Cronulla-Sutherland Sharks.

Gallen’s amateur boxing career began in 2012 in a rugby league vs rugby league charity event in Auckland, Newzealand. After one more fight, he decided to turn professional in 2014. In his first bout, he faced Herman Ene-Purcell on February 19. He won the debut match via technical knockout.

Following his successful debut match, Paul Gallen had 8 more fights till February 2019. He consecutively won every match. Then in November of the same year, he drew against Barry Hall. Gallen’s career-first loss came in 2021. On June 16, he lost against Justis Huni via a technical knockout.

Following his first loss, Gallen made a fast comeback. In December, he faced Darcy Lussick and came victorious via TKO. Unfortunately, Gallen lost the next match with Kris Terzievski via a unanimous decision. He has a good record of 12 wins and 2 losses.

Who is Ben Hannant?

Ben Hannant is an Australian professional boxer. He is currently competing in the heavyweight division. He is a former rugby league footballer who played as a prop for the Intrust Super Cup team Burleigh Bears.

In 2015, Hannant made his professional NRL debut. That year, he started playing for the Sydney Roosters. After participating in the Premier League grand finale that year, he signed a new contract with his junior club, Brisbane Broncos. After playing in the club for the following two years, he shifted his career to Canterbury-Bankstown Bulldogs for a season.

Ben Hannant returned to Brisbane Broncos where he played till 2014, after the 2010 season. Then in 2014, he shifted to North Queensland Cowboys. There he played for a year. At the end of 2016, he announced his retirement. This was due to a chronic knee injury that frequently kept him out of the field.

Who is Justin Hodges?

Hodges made his boxing debut against Rob Baron on February 9, 2019. Taking Baron out in just 75 seconds, Hodges grabbed the win. Throughout his three and half year-long career, he had 6 fights. Among these, he won 5 and lost one. He faced his first career loss in his third start. Knocking Hodges out in only 39 seconds, Darcy Lussick came victorious that night.