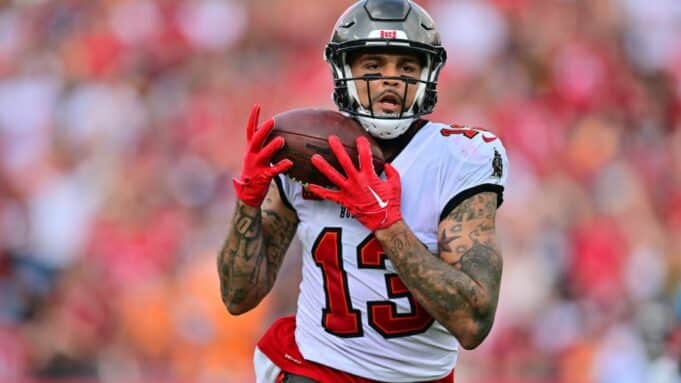 Mike Evan Contract: The Buccaneers’ star will be the biggest free-agent wide receiver in the 2024 offseason.

Mike Evans of the Tampa Bay Buccaneers may appear to have been in the NFL for an eternity, but the nine-year veteran won’t turn 30 until next preseason. That means there’s still time for another big-money Mike Evans contract, which will come in 2024 when he’s the top free-agent wide receiver on the market.

Mike Evans signed a four-year, $14.63 million contract with the Buccaneers after being selected seventh overall in the 2014 NFL Draft out of Texas A&M. Evans re-signed with the organization that drafted him when his rookie contract expired.

That’s a hefty number, but Evans has a potential to nearly double it with his next contract as the greatest free-agent wide receiver on the market in 2024.

When Mike Evans’ current contract expires at the end of the 2023 NFL season, he will be only 30 years old and in high demand throughout the league.

A lot can happen in the next 365 days, but Evans appears to be the finest free-agent wide receiver available next year. With Tom Brady expected to leave this summer, the Buccaneers are likely to move into rebuild mode soon and let Evans go to the highest bidder.

Related
Percy Hynes White Scandal And Controversy: Is He A Rapist?

In addition to Evans, the top free-agent WR class in 2024 includes:

While some of these players, particularly the younger ones, may choose to stay with their present teams, Evans will be the greatest and most accomplished of the group in 2024. As a result, the next Mike Evans contract will most likely be for three to four years at a salary of $25 to $30 million each year.