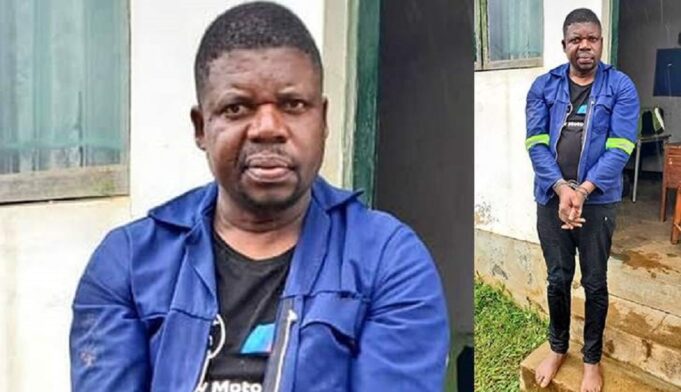 Jaison Muvhevhi has been arrested after he was accused of killing a Police officer.

According to reports, Jaison Muvhevhi, the former CID officer and gold dealer who shot and killed three people in Wedza on Friday afternoon, managed to escape from Police after a bloody shootout in Rusape on Saturday.

Muvhevhi, hiding from the Police, managed to escape a shootout with them on Saturday in Rusape before running into a mountain.

Despite claims on social media that he had been apprehended, Assistant Commissioner Paul Nyathi, a spokesman for the national Police, said the hunt for the suspect was still on. According to Nyathi, they were still looking for him and had not yet arrested him.

Has Jaison Muvhevhi Been Arrested?

While the prophet of the apostolic sect was giving a sermon in front of the congregation, Muvhevhi shot Inspector Maxwell Hove, the officer in charge of the Wedza Police station, and a male bartender.

Another Police officer is said to have been gravely injured by him. Jaison Muvhevhi, a former Criminal Investigations Department (CID) officer, was arrested by Police this morning in Mozambique after shooting and killing three people last Friday in Wedza.

The suspect stole a gun from the officers and fled, leaving behind his car and the weapon. Muvhevhi is captured by Mozambican authorities wearing green uniforms in a video that is going viral on social media.

What Did Jaison Muvhevhi Do?

Muvhevhi shot and killed Inspector Maxwell Hove, the officer in charge of the Wedza Police station, on Friday in the late afternoon after killing a prophet of an apostolic sect. Moreover, he also shot a male bartender.

In the video, voices can be heard asking if Muvhevhi is there, to which another voice replies that he is. According to reports, when Muvhevhi realized Police were pursuing him in the Chiduku region near Rusape, he opened Fire on the officers, setting off a fierce gunfight.

You May Also Like: Jamea Harris Death: Alabama Basketball Player Darius Miles Arrested With Murder- Where is He Now?

Muvhevhi abandoned his Toyota Allion and fled on foot into the nearby Chigora mountain, according to the Police. A Techno cell phone and a ZRP FN rifle with four rounds of ammunition were found by Police.

Before his arrest, Muvhevhi attempted to murder Raphael Nyahwema at Mutare Boys High on January 13, 2022, according to a Police memo from the Manicaland province.

Muvhevhi then traveled to ward 11 Mutasa, south constituency of Mutare Boys High School, where he approached the residential quarters of the ancillary staff. There, he encountered a woman named Zvikomborero Mangworwa, age 23, who had just emerged from the bathroom.

Mangorwa signaled that she was alone, at which point Muvhevhi took out US$10 and told her to buy a chicken and make him some food. A drunken Raphael Nyahwema, the Mutare Boys High School caretaker, arrived unexpectedly and demanded Muvhevhi explain his appearance.

You May Also Like: Where Is Dennis Eckersley Daughter Boyfriend? George Theberge Was Arrested For Child endangerment

Nyahwema’s interruption infuriated Muvhevhi, who pulled out his holstered pistol and fired three shots at Nyahwema, who was within ten meters of him. When he saw the gun being pulled back, the target sprinted for his life and was missed by all three shots