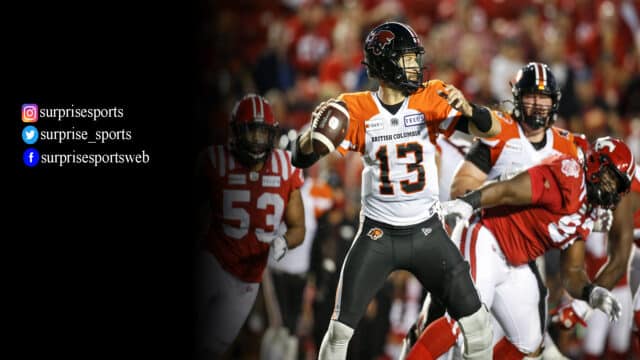 BC Lions vs Calgary Stampeders will be at McMahon Stadium, Calgary, as Week 15 in CFL wraps up on Saturday. Here you can follow the start time, preview, prediction, and how to watch the BC Lions vs Stampeders game on TV and Live Stream.

After the season-ending injury of the league’s best quarterback Nathan Rourke, the Lions have dropped back-to-back games.

BC Lions lost to the Alouettes by 31-10 after resting off week 13. In week 12, they suffered a 16-23 home defeat against the Roughriders.

With the former all-star Vernon Adams Jr as the quarterback, the Lions will try to come back in the winner’s circle. They are still ahead of the Stamps in the West with an 8-3 record.

On the other hand, the Stampeders are coming off home-and-home wins against the Elks. They won 26-18 in Calgary before hammering the Elks by 28-56 in Edmonton.

Before those wins, the horsemen lost to the Blue Bombers by 31-29 in Week 12.

The Lions and Stamps met once this season in week 10 in Calgary. BC Lions won that nail-biter by 40-41 points on a last-second field goal.

The BC Lions beat the Stamps in Week 10 by 40-41 on a last-second field goal. Nathan Rourke was key to that victory, throwing for 488 yards and two touchdowns while adding another two scores on the ground. However, the 24-year-old quarterback is out with a season-ending injury.

Related
Ottawa Redblacks vs BC Lions: Prediction, Injuries Updates, How to Watch

On the other hand, the Stamps are on an 8-4 record this season. Their three defeats came against the Blue Bombers and the only other against the Lions. All those defeats were agonizingly close.

The Stamps’ offense has been on fire with Jake Maier. Moreover, Ka’Deem Carey is leading the league in rushing.

We predict the Stamps will clinch a victory over the Lions tonight. But can they cover the spread of being around 7-point favorites?

The Stamps’ defense has been vulnerable and ranked fifth in the league. We predict the Lions will keep things under a touchdown with the 2019 East All-Star Vernon Adams Jr at the helm. BC Lions +7.

How to Watch BC Lions vs Stampeders?

You can watch BC Lions vs Calgary Stampeders live on TV via TSN in Canada. The game will be available to watch in the United States via live stream on ESPN+, starting from 7:00 pm ET.