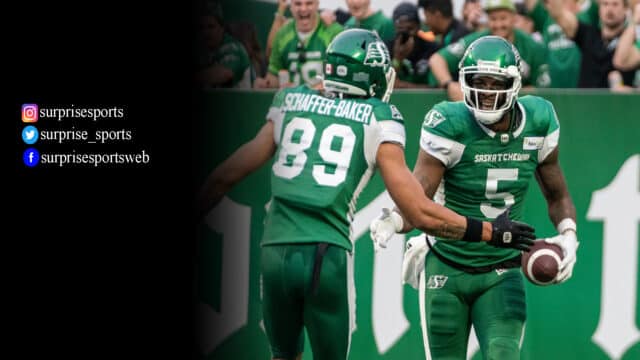 Edmonton Elks vs Saskatchewan Roughriders will be at Mosaic Stadium as Week 15 in CFL kicks off on Friday. Here you can follow the start time, preview, prediction, and how to watch the game on TV and Live Stream.

It will be the third meeting between the Elks and Roughriders this season. Saskatchewan won both games in Week 2 and Week 10 in Edmonton.

Edmonton Elks are on a 3-match losing streak. Last week, they suffered a 28-56 home defeat against the Stampeders. They are on a 3-10 record at the bottom of the league.

On the other hand, the Roughriders are on a 2-match losing streak. The Riders, affected by a stomach illness, suffered a heavy defeat by 54-20 against the Blue Bombers last week. A week earlier, they lost a close game at home by 18-20 against the same opponent and rolled up 390 yards. The Riders are 4th in the West with a 6-7 record.

The Roughriders are 2-0 up in their two head-to-head meetings against the Elks this season. They won both games by double digits.

The oddsmakers expect a big win for the Roughriders at home against the Elks. They are 7.0-point home favorites in the Pinnacle. We are tipping the Roughriders to grab a win by covering the spread.

The Roughriders are 2-0 up already this season against the Elks. They won both games by double digits in Edmonton. Saskatchewan will get the home support of the Mosaic Stadium on Friday. It’s typically a difficult place for the opponents to move the ball.

The Elks are coming off a 28-56 thrashing defeat against the Stamps. They are the worst defense in the league, conceding an average of 34.1 points per game.

Though the Roughriders suffered a 54-20 defeat against the defending Grey Cup champions Blue Bombers last week, they were affected by a stomach illness.

We predict Saskatchewan Roughriders will come back strongly at home to grab a massive victory.

How to Watch Elks vs Roughriders on TV and Live Stream

You can watch Edmonton Elks vs Saskatchewan Roughriders live on TV via TSN in Canada. The game will be available to watch in the United States via live stream on ESPN+, starting from 9:30 pm ET.