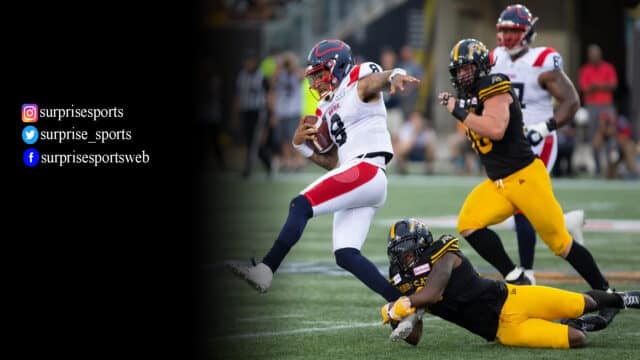 The Alouettes will play host to the Tiger-Cats as Week 16 in CFL kicks off on Friday. Here you can follow the Hamilton Tiger-Cats vs Montreal Alouettes live stream, start time, preview, and prediction.

The Tiger-Cats are coming off their biggest and most significant win of the season. They took care of the reigning Grey Cup champions Bule Bombers (then on 11-1) by 48-31 points last week.

Dane Evans played his best game of the season. He completed 25-of-32 for 327 yards and threw 5 touchdowns.

Hamilton Tiger-Cats will take the momentum in Montreal when they face the Als on Friday. They are now on a 4-9 record, 3rd in the East.

On the other hand, the Alouettes are fresh off their last week’s bye. In week 14, they took full advantage of Nathan Rourke’s absence and beat the Lions by 32-10 points, despite not-so-good quarterback play. Montreal Alouettes are 2nd in the East with a 5-7 record.

The Ticats and Als are 1-1 level in their previous two head-to-head meetings this season. In week 8, the Ticats took care of the Als by 24-17 points in Hamilton. Montreal returned the favor at home with a 29-28 victory in week 11.

Related
Ottawa Redblacks vs BC Lions: Prediction, Injuries Updates, How to Watch

The Tiger-Cats are coming off their best performance of the season. They beat the Blue Bombers by 48-31 points.

Dane Evans played his best game of the season. He completed 25-of-32 for 327 yards and threw 5 touchdowns. The Ticats added another 97 yards on the ground against a Winnipeg defense that has allowed the fewest points per game in the CFL.

Elsewhere, the Als are on a good run of form. They won three of their last four games, starting with an upset win over the Blue Bombers in Week 10.

The Ticats and Als met twice this season with a 1-1 record. In week 8, the Ticats were ahead by 24-6 in the fourth quarter and took a 7-point victory.

In Week 11, the Als won by 29-28 against the Ticats. They secured the game with a 48-yard field goal as time expired.

We predict Dane Evans will show another big performance to win the game for the Tiger-Cats.

How to Watch Tiger-Cats vs Alouettes Live on TV and Online?

You can watch Hamilton Tiger-Cats vs Montreal Alouettes live on TV via TSN in Canada. The game will be available to watch in the United States via live stream on ESPN+, starting from 7:30 pm ET.