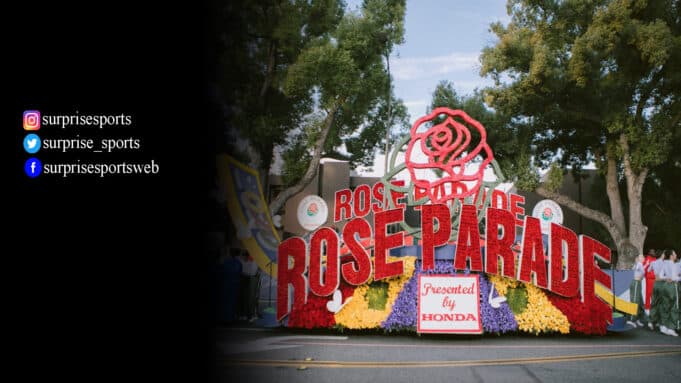 This year, the Tournament of Roses Parade in Pasadena isn’t taking place on New Year’s Day. It is on the menu on Monday, January 2, 2023. The fans are getting ready for the festival and the Rose Bowl Game between Penn State and Utah later in the day. Here we have the Rose Bowl Parade 2023 live coverage and free streaming, including start time, performers, and everything.

The first parade was held back in 1890. In the 134-year history of the Rose Day Parade, it’s taking place a day after New Year’s Day for the 20th time. It generally takes place on the first day of January every year. However, the Pasadena Tournament of Roses Association does not hold the festival on Sundays.

The eyes of the Americans will be on this parade festival, a 5.5-mile parade in Pasadena, California. The Parade is a part of the “Tournament of Roses”, consisting of the Rose Day Parade and the Rose Bowl Game.

Musical performances and the parade of 5.5 miles will kick-start the festival. The event will then be followed by the Rose Bowl Game 2023, this year between Penn State of the Big 10 and Utah of the Pac-12.

Former Arizona Rep. Gabby Giffords is serving as grand marshal. She will ride down Colorado Boulevard in the parade and be part of the coin flip for the 109th Rose Bowl game later Monday.

When and Where is the Rose Bowl Parade 2023?

The Rose Day Parade will be held on Monday, January 2, 2023. The parade will start at 11:00 am ET from Pasadena, California, and go 5.5 miles down Colorado Boulevard.

The festive parade will begin after the opening performance by Fitz and the Tantrums at 11:00 pm ET.

Get ready to get up on your feet and dance as we turn the corner into 2023 with Fitz and The Tantrums when we kick off the Rose Parade with the Opening Spectacular presented by Honda. 👏

The following artists are performing in today’s parade:

How to Watch the Rose Bowl Parade 2023 on TV

The Rose Parade will be telecast live on several TV channels. NBC, ABC, and Univision will broadcast the festival live, from 11:00 am to 1:00 pm ET.

The Rose Bowl Game will start at 5:00 pm ET, with live coverage on ESPN.

How to Watch TCU vs Michigan: Fiesta Bowl Time, TV, and Stream

How to Watch Syracuse vs. Minnesota: Live, TV Channel

How to Watch Louisiana vs Houston: Live, TV Channel