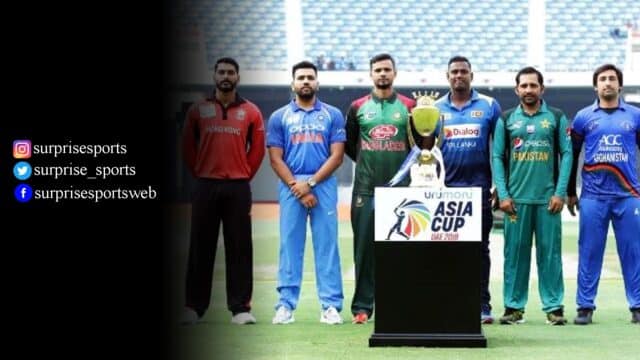 Asia Cup is one of the most prestigious cricket tournaments. Here you will know the history and winners list of the Asia Cup. Let’s check them below.

Cricket has always been hugely popular in Asia and the continent, producing some of the best sports teams and individual players. The idea for the Asia Cup took hold in 1983 when the Asian Cricket Council decided to implement a tournament to promote goodwill between the countries involved.

It was originally intended to occur every two years, but that hasn’t always been the case due to issues with cricket schedules worldwide. Since the advent of T20 cricket, the Asia Cup has alternated between an ODI and a T20i competition.

This is the only cross-continental event in the game, and the winners have crowned the Champions of Asia.

The format has changed a little over the years, but this is the structure of the World Cup, as used for the 2022 tournament in the UAE.

Six teams take part in the group stages of the Asia Cup. Each side within that section will play the other once. At the end of that sequence, the two best-performing countries in each group will progress to the Super Fours.

All four qualified teams go into the Super Fours and will play each other once. After those matches, the best two sides go straight into the final.

The biggest five teams in Asia automatically qualify for the Asia Cup. They are:

One more place is up for grabs, and a qualifier decides this. In 2022, Hong Kong came through to complete the list after fighting off Kuwait, Singapore, and the UAE.

How Many Teams Qualify for the World Cup From Asia?

Unlike other sports such as football, there are no restrictions on where teams come from at the Cricket World Cup. The best-performing teams from previous tournaments will proceed directly to the next World Cup.

Additional places will be up for grabs, and a series of qualifiers will decide these. Once again, these are not regional, so it could be the case that we will see at least five teams from Asia at the Cricket World Cup.

How Many Times has India Won the Asia Cup?

Using statistics and including the 2018 tournament, India won the Asia Cup on seven occasions. Their first victory came in the inaugural edition in 1984, while India’s most recent triumph came in that 2018 competition in the UAE at the time of writing.

This tally makes India the most successful team in Asia Cup history.

India won the 1984 Asia Cup. Only three teams participated in this competition, and there was no final.

Instead, India won the competition because they came top at the end of a group phase that included Sri Lanka and Pakistan.

The 1986 Asia Cup was the first to feature a final that Sri Lanka won after defeating Pakistan by five wickets.

India did not participate in this tournament, and Bangladesh took its place.

India returned in 1988, and the Asia Cup was expanded to four teams, with Bangladesh retaining its place in the tournament.

India would win the competition, beating Sri Lanka by six wickets in the final.

The next edition of the Asia Cup crossed 1990 and 1991. The same four teams took part, and India would claim their third title.

It was another comfortable victory in the final as India chased down Sri Lanka’s target of 205 with seven wickets and nearly three overs to spare.

India won again in 1995 when the UAE held the Asia Cup. Once again, Sri Lanka was the beaten finalists as India cruised to victory in the final by eight wickets with almost eight overs to spare.

Sri Lanka earned overdue revenge at the 1997 Asia Cup when they defeated India in the final. The Sri Lankans were world champions and had become known for their aggressive ODI cricket.

The approach paid off as they chased India’s target of 240 for losing two wickets with more than 13 overs left.

A new name was on the trophy in 2000 as Pakistan claimed its first title. Pakistan batted first in the final and posted a solid total of 277.

In reply, Sri Lanka fell 39 runs short as they were dismissed for 238 despite Marvin Atapattu’s century – the first in an Asia Cup final.

Sri Lanka continued an impressive run with victory in the 2004 Asia Cup final. History was made in this tournament as Hong Kong and the UAE joined up to take the list of participants to six.

Sri Lanka came through after defeating India by 25 runs in the final.

It was Sri Lanka again in 2008, and, once again, India was the runners up. In the final, a brilliant 125 from Sanath Jayasuriya set up victory by a huge margin of 100 runs.

Pakistan won their second Asia Cup title, and their winning margin in the final was the shortest in terms of runs.

Sri Lanka came through in 2014 with a five-wicket win in the final.

The game was notable as it produced two centurions: Fawad Alam passed three figures for Pakistan, but Lahiru Thirimanne guided the run chase with 101 from 108 balls.

History was made in 2016 as the Asia Cup adopted a T20 format for the first time. Five teams were in contention as India came through to claim their sixth title, beating Bangladesh by eight wickets in the final.

India was again triumphant as the Asia Cup returned to an ODI format in 2018. The competition also returned to its six-team schedule.

In the final, a thrilling finish saw India beat Bangladesh by three wickets from the match’s last ball.

Which Country Will Host the 2023 Cricket Asia Cup?

Pakistan will host the 2023 edition of the Asia Cup. This marks a significant milestone for the country as international cricket starts to return here.

Another exciting development includes a proposed expansion which will see eight teams play in the final stages for the first time.

They are such strong cricket nations that the Asia Cup is a must-watch, no matter where you happen to be.

Whether it’s T20 or ODI, you can be sure of some thrilling cricket, and it’s great to see some planned expansion for this thrilling tournament.