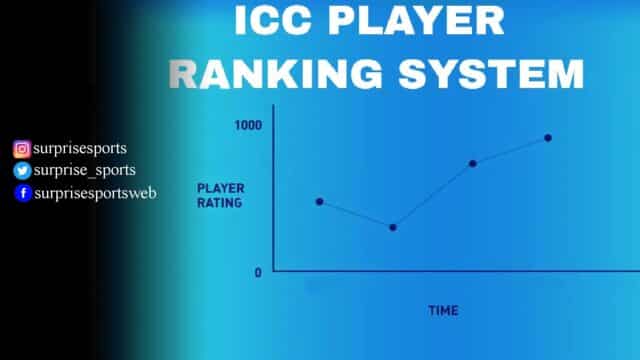 We often read news relating to updated player rankings. Everyone likes to know who the best cricketers are, but what is the ranking system, and how does it work?

What is the ICC Ranking System?

The International Cricket Council (ICC) produces a ranking system for both teams and players. It is a method designed to tell us who were the best players in the world at that time.

There are categories for bowlers, batters, and all-rounders, while rankings appear for the three main forms – Test Cricket, ODIs, and T20is.

How are ICC Player Rankings Calculated?

The ranking system was originally introduced in 1987. It worked, but it didn’t accurately assess immediate form. Things have improved, and here’s how points are allocated in the present day.

Runs Scored: – the literal amount of runs scored by the batter during the game.

Ranking of Opposition Bowlers: If the batter scores those runs against a highly rated bowling team, they will be awarded more points than if they scored against a weaker attack.

The ICC rankings system uses its official bowler ratings to determine the true value of those runs.

Level of Runs: This term could be rephrased as ‘percentage.’ If a batter scores heavily in a low-scoring game, they will be awarded more ranking points than they would if the match had been a high scorer.

Undefeated Innings: If a batter is not out at the end of the innings, they will receive bonus points.

The Match’s outcome: More points will be awarded in a winning match than for drawn or lost games.

Wickets and Runs: The first factor to consider when ranking a bowler is the number of wickets they take. The runs conceded by that bowler will also be taken into account.

Ranking of Dismissed Batters: The system will now look into the value of those wickets. If the bowler dismisses batters in the top order – let’s say between numbers 1 to 5, they will carry more value than those from numbers 7 to 11.

The ICC ranking system for batters helps to determine exactly how valuable each of those wickets is.

Level of Runs Scoring: Once again, this is all about percentages. If, for example, a bowler takes five wickets for 30 runs, they will earn more ranking points if the batting team scores 400 than they would if the opposition had scored 200.

The number of overs a bowler sends down is also considered. If they’ve had a heavy workload, they will earn more points than teammates who have bowled fewer overs.

Bowling points can even be awarded here if the bowler hasn’t taken a wicket.

Bowling is another area where the ICC ranking system will reward players for the match result. More points will be awarded for a win instead of a loss or draw.

Fielding and Other Points

There is no ranking system for fielding yet, although it would be interesting to see it. However, a separate section for all-rounders combines the batting and the bowling points.

Ranking in ODI and T20 Matches

The ICC also produces rankings for ODI and T20i cricket. The systems work in the same way for both formats.

Firstly, all the criteria used for assessing batters in test cricket are carried over into limited overs matches. Therefore, we have points awarded for runs scored, the quality of the opposition, whether or not a batter is undefeated, and other factors.

There are additional areas that the ICC takes into account, which are:

The pace of Run Scoring: If a batter scores 100 runs in 75 balls, they will be awarded more points than a player who scores 100 from 100 balls.

Players have also deducted points if they miss a game, no matter the reason. This may sound harsh, but it’s necessary if the rankings are to reflect immediate form.

The deduction for missing a game in ODI games is 0.5% of the player’s current total. In T20s, the deduction is 2%

For bowlers in the short forms, it’s important to keep the runs down. For example, a bowler who returns figures of 4/14 in an ODI or a T20i will receive more points than a teammate who has taken 4/50.

The deduction of points for missing games is also applied to bowlers.

Fielding and Other Points

Once again, there are no rankings for fielders currently, but the batting and bowling points are combined to tell us who are the best all-rounders in ODIs and T20is.

It’s interesting for us, as fans, to follow the ranking system, but it’s also important for teams at an international level. Rankings help identify the players who are really on the form then, and it’s down to their opponents to devise a way to deal with them.

National selectors can also consider rankings when it comes to picking teams. It’s all about assessing form, and the ICC player ranking system is our best.

How Many Bouncers are Allowed in an Over?