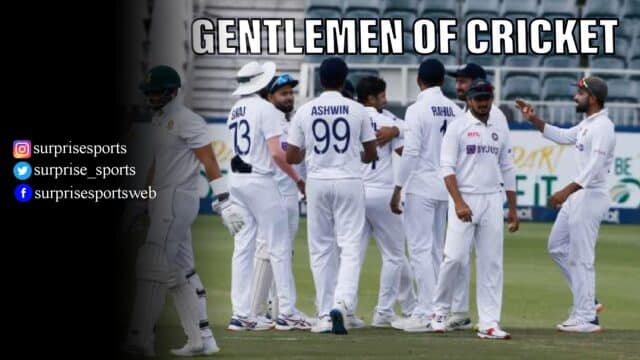 They say that cricket is a gentleman’s game, but who are the players who have upheld this theory better than most? Here you will know the gentleman of cricket.

Who is the Gentleman of Cricket?

The opinion will vary, but most are putting Rahul Dravid in the frame. This assessment is based on the fact that Dravid was a real team man who always put the side’s interests ahead of his own.

He upheld the spirit of the game, and most will put Rahul Dravid at the top of this list.

The former Indian cricket captain and coach was known as The Wall during his playing days because of his ability to play long innings. It was an unselfish approach that always looked to benefit the team.

Dravid occasionally kept wicket in limited overs games so that his team could play an extra batter, which is another example of his gentlemanly demeanor.

Australia’s Michael Hussey earned himself the nickname of Mr. Cricket for his knowledge of the game. He was also fair in his approach to batting, and the fact that he waited so long for his chance to play for Australia is another example of his gentlemanly conduct.

Indian fans will remember many occasions when MS Dhoni proved himself as a gentleman of the game. Followers of cricket outside of the sport would also acknowledge those times when he upheld its spirit.

England fans, in particular, will remember the time he recalled Ian Bell after a controversial run-out during India’s 2011 tour. That was just one of many occasions when MSD proved his admirable qualities as a leader and a friend of cricket in general.

Adam Gilchrist famously ‘walked’ on a decision, and that’s one reason why he’s been included on this list. He may not have been averse to a sled or two, but he played the game fairly, and that’s why he deserves his place.

New Zealand’s Stephen Fleming may have made some mistakes in his youth, but he matured once he took on the international captaincy. While leading New Zealand, he earned praise and respect of teammates and opponents alike.

He’s a calm man, and that calm outlook has helped his later coaching career.

Anil Kumble will forever be remembered as a great leader of Indian cricket and one of the best spin bowlers of all time. He skippered India through some difficult times as he continued to uphold the spirit of the game.

His supporters will recall how he once took the wicket of the great Brian Lara while bowling with a broken jaw – evidence of his indomitable character.

Former Sri Lankan batter Kumar Sangakkara now works as a commentator and is known for his fair and unbiased views.

That fairness was also in evidence across his long playing career.

South Africa’s AB De Villiers always came across as a very humble man who liked to play down his world-class ability.

That mindset helped AB become one of the most respected players in world cricket.

We often talk of cricketers who play the game with a smile, but Chris Gayle possessed the biggest grin. In his long career, he dispatched countless bowlers back to and over the boundary.

The man known as the Universe Boss had high respect for his opponents, and that respect was undoubtedly returned.

Like many players on this list, Alastair Cook would rarely get involved with sledding the opposition. He preferred to let his bat do the talking for him, and he would finish his international career as England’s leading test run scorer.

Cook was knighted for his services to cricket, which is an endorsement of his standing as a true gentleman.

Some may not agree with this inclusion. A fearsome fast bowler, you could be forgiven for thinking Australia’s Brett Lee was a feisty character.

Related
What is Run Rate in Cricket? – Run Rate Explained

However, Lee played the game in the right spirit and rarely looked to intimidate bowlers or umpires. I also recall a game where he continued to bowl at the wicket while some of his colleagues took a negative line as Australia was in danger of losing.

Many feel that South Africa’s Jacques Kallis is the greatest all-rounder cricket has ever produced, and his statistics tend to back that up.

As he was such an important team member, many opponents tried their best to wind up Kallis and make him lose his composure. Unfortunately for them, he rarely, if ever, responded.

It’s fair to say that most of the cricketers on this list weren’t perfect 100% of the time. It’s based on their overall approach to the game and the sporting way in which they played cricket at the highest level.

It could also be said that the list is just a bit of fun, but I think it’s quite important. We should all remember the spirit of cricket when we’re playing, and it doesn’t matter if we’re professional players or just average club cricketers.