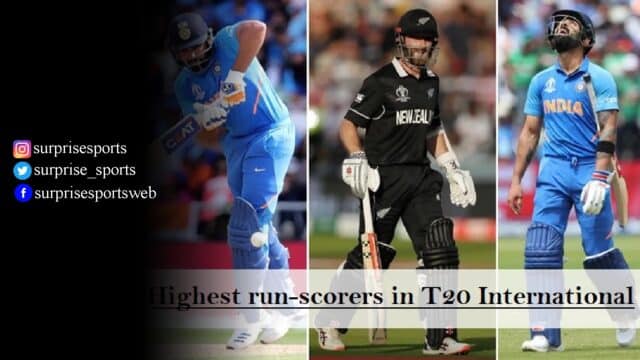 T20 is the shortest form of international cricket and the one where the run rates are at their highest. So, what are the biggest team totals in T20is?

What is the Highest Score in T20 by a Team?

A team’s highest score in T20 international cricket is 278/3, made by Afghanistan against Ireland in Dehradun in February 2019.

The total was far too much for the Irish team, who made 194/6 in response, losing the game by 84 runs.

Afghanistan holds this particular record with the 278/3 made against Ireland in 2019. The total was based on a brilliant 162 from Hazratullah Zazai, which became the second highest score in the individual format.

Zazai put on 236 for the first wicket with Usman Ghani.

The Czech Republic is in second place on this list with a total of 278/4, which was made against Turkey in Ilfov County in 2019.

The game is also notable because Turkey made just 21 in reply. The winning margin of 257 runs is a record for all T20 cricket.

Australia is next with a total of 263/3, which was compiled against Sri Lanka in Pallekele in 2016. Glenn Maxwell led the way with 145, and the Australians won by 85 runs.

Sri Lanka recorded a massive T20i score when they took on Kenya at Johannesburg in the 2007 T20 World Cup.

Their total of 260/6 remains a record for the tournament, leading to an emphatic 172-run victory.

India’s highest score in a T20 international is the 260/5 made against Sri Lanka in Indore in 2017. Rohit Sharma scored a century as India won by 88 runs.

The Czech Republic is one of the stronger associate ICC nations, and they made another huge score in T20 internationals when they took on Bulgaria in Marsa in May 2022.

The Czechs’ total of 258/2 featured centuries by both opening batters, leading to a victory by 88 runs.

Denmark is next with this exceptional total of 256/5, which was made in a game against Gibraltar at Waterloo in June 2022. It was Denmark’s best in this format, and it set up victory by 132 runs.

New Zealand is a formidable T20 side, and they posted an impressive total of 254/5 against Scotland in Edinburgh in July 2022. Mark Chapman top scored with 83 as the Kiwis won by 102 runs.

Scotland 252/3 vs. the Netherlands

Scotland posted a huge T20 total of their own when they made 252/3 against the Netherlands in Dublin in 2019. The score was based on an undefeated 127 by George Munsey at the top of the order.

The Dutch responded well and made a 194/7 reply, but it wasn’t enough to prevent defeat by 58 runs.

Australia and England have produced some classic cricketing battles in all formats, and this was a memorable T20 encounter. At the Rose Bowl in 2013, the Aussies posted a massive total of 248/6, built on a huge individual score of 156 from Aaron Finch.

This is the shortest form of the international game. Teams can keep wickets in hand, so we expect run rates in T20is to be higher. However, some of these figures are extremely impressive.

It’s also interesting to note that there are a lot of mismatches in the game. Some countries are still developing, and their opponents have taken advantage of weak bowling attacks. For this reason, the list will be fluid, and we should see more entries shortly.