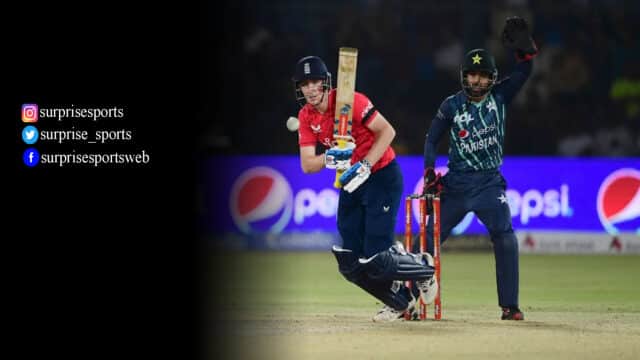 After losing the opening T20 in the seven-match series, Pakistan will be keen to win against England in Karachi, on Thursday, 22 Sept. Here we have Pakistan vs England 2nd T20, start time, team news, starting XI, prediction, and how to watch live.

The middle-order of Pakistan continued to struggle as they suffered a 6-wicket defeat against England. The home team is now 0-1 behind in the seven-match T20 series.

Despite missing big names due to injury, England chased down the target relatively easily. Alex Hales batted dip in his return to score 53 of 40. Harry Brook’s not-out 42 of 25 helped England to go 1-0 up in their tour of Pakistan.

Luke Wood was the man of the match for his 3 wickets in 4 overs with conceding only 24 runs. Adil Rashid was handy with the ball, taking 2 wickets.

With the T20 World Cup approaching with the passing of each day, Pakistan needs to find the right ingredients. On the other hand, England will be keen to go 2-0 up on Thursday.

It’s not likely Pakistan would go for changes. However, they could tweak the batting order.

Jos Buttler would sit out the entire Pakistan Tour. However, he would return for the T20 World Cup in October.

England would likely go with the winning combination.

The chasing team would get an advantage in this game as well. The team batting first will look to set a big target.

Pakistan’s middle-order needs to come forward and contribute to winning this game. We are sure they are working on this area.

On the other hand, England will be a lot more confident after winning the opener. It’s going to be an intriguing battle of bat and ball. The fans will be up for a treat in Karachi.

We predict Pakistan’s batter will show a solid performance to level the series.

Read Also: Highest Scores in T20 Internationals by a Team