The famous 160+ meters sixer by Albert Trott at the Lord’s Stadium in 1900 in a match between England and Australia is surely the biggest sixer in the history of cricket. The 158-meter sixer by Pakistani all-rounder Shahid Afridi in 2013 and the 135-meter sixer by Australian pacer Brett Lee during the 2005 Ashes Series also deserve their mentions among the biggest sixes in cricket of all time.

Among the most exciting moments on the cricket field are the sixes scored by the batsmen on the crease. Whether it’s a small sixer or a big one makes little difference to the viewers once the ball starts to fly. But when the ball flies really long and high, it’s always a sweeter deal.

Seconds seem like infinity to those watching the match as they sit wondering how high and long the ball will go and whether it will fall into the palms of a fielder or go straight into the gallery. It’s the anticipation within those fractions of a second that can turn cricket lovers into cricket junkies. Let’s take a look at the top 10 biggest sixes in cricket of all time.

Biggest Sixes in Cricket of All Time | Exclusive Ranking

The top 10 biggest sixes list is made from the stats and data available in the cricket world in 2023. So we only take accounts on the sixers, which are listed on cricket history found on several archival websites. But we are certainly open to any comments, modifications, and amendments.

Feel free to write to us or tell us in the comment section below if you have more accurate and interesting data to be shared. Happy reading, folks.

Pakistan’s Ijaz Ahmed played some amazing displays on the cricket field. He might have been an understated cricketer, but he managed to draw attention to himself and his batting style with an incredible sixer of 115 m.

It was a match in 1999 when Pakistan faced India at Mohali. Interestingly, the entire match saw just two sixes, both of which were scored by Ahmed. This sixer has remained in the memory of the people even now. West Indian batsman Chris Gayle and New Zealand player Corey Anderson both hold the record for the ninth biggest sixer recorded in the history of cricket. Gayle’s biggest sixer came in 2010 in the World Twenty20 tournament at Bridgetown. Gayle is just 2nd behind Shahid Afridi in All-Time Six Hitter In International Cricket.

He turned a delivery by India’s Yusuf Pathan into a 116 m stunner! Anderson, on the other hand, sent a ball to the roof in an ODI match in 2014 at Napier, though he, too, did so in a match against India. It’s no surprise that Boom Boom Afridi is on this list twice. The Pakistani batsman was, after all, known for his aggressive batting, with the record of scoring one of the fastest One-day international centuries of all time, having scored the 37 Ball Century.

Back in January 2005, Afridi was on the crease, defending Pakistan against Australia, at Perth, when he turned a delivery into a 117 m sixer, making the stadium erupt in joy and excitement. In March 2009, he scored a massive 118 m six during India’s tour in New Zealand. He hit a majestic shot that stunned everyone, and after doing so, he did not even turn around to look at the ball! Now that’s confidence! Australia’s celebrated and extremely talented batsman, Mark Waugh, was known for his elegant style of batting. And he found his way into the list of players who have managed to hit the biggest sixers in cricketing history.

This gifted stroke-master took the breath away from all those people watching the match when he turned a Daniel Vettori delivery into a massive sixer in a match against the arch-rival of the Aussies, i.e. New Zealand, in 1997. His sixer against one of the greatest spinners of all time will stay in the heart of Cricket fans forever. Yuvraj Singh, one of the most notable batsmen in India, is known for his big hits and spectacular displays on the field. He found his place in the list of players to have hit the top 10 biggest sixes in cricket when he hit an enormous one in September 2007 during the Twenty-20 World Cup match against Australia.

Brett Lee sent a delivery his way, and Yuvi turned it into the most memorable six of this career. India eventually went on to win the t20 World Cup in 2007. New Zealand representative Jacob Oram acquires the 4th position on the list of players who have hit the top 10 biggest sixes of all time. He scored his 130 m shot, one of the longest sixes, in a One Day International match against Australia back in 2006.

As the Kiwis chased a huge score of 332 at Sydney to defeat their arch-rivals, Oram sent the ball across the ground and led commentator Tony Greig to exclaim how he sent the ball to the 3rd story of the stadium! In a T-20 match against West Indies, Australia’s immensely talented bowler and the 2nd fastest bowler in history, Brett Lee, hit one of the top 10 biggest sixes ever in the history of the sport. It was a delivery by Rovman Powell that met such a fate in the hands of the Australian heartthrob.

He first proved his batting prowess in the 2005 Ashes series. This time, Lee hit the ball with a cracking sound that resonated across the noisy stadium. And he sent the ball to the roof of the Gabba ground! In second place on the list of the biggest Six in cricket of all time is the hit by Shahid Afridi, with his 158 meters hit in the year 2013. It was a match in which Pakistan faced West Indies in an away match.

Afridi, known as Boom Boom Afridi and the King of Sixes back then, took delivery that he sent right into the neighboring golf course. And that turned into the biggest six ever in the history of cricket! It was a remarkable six! 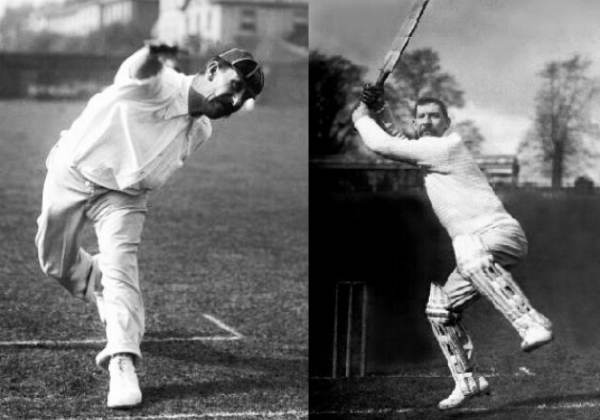 Albert Trott sits at the top of the list of the players to have scored the top 10 biggest sixes in cricket of all time. He represented both England and Australia on an international level. However, that was only possible in the 1900s when he used to play.

Ironically, he set the record for the biggest sixer in cricket in a match between England and Australia! Besides, his 160 m sixer cleared the Lord’s Pavilion!

These players, with their sixes, have set some amazing records. But what’s even more amazing are the memories created by them. Yes, a sixer is the moment of joy and celebration for the supporters of the team which is being represented on the crease! Let us know about your memories of the Top 10 Biggest Sixes of all time in the comments below!

FAQs Regarding Biggest Sixes in Cricket

Q. Which is the largest six in cricket?

In the 3rd ODI between Pakistan and South Africa on March 17, 2013, Shahid Afridi unofficially set the record for the longest six in cricket history by clearing 158 meters. There are millions of fans across Pakistan who love him.

Q. Who is Sixer King?

In the current generation of cricketers, Rohit Sharma can be called the ‘Sixer King’. Throughout his career, he has hit 244 sixes and 832 fours. He has been India’s finest cricketer to date.

Virat Kohli is the God of IPL. With 6076 runs in 199 matches, he is the highest run-scorer in the IPL. In a single season, Kohli scored more than 900 runs in the Indian League.

Q. Who is the God of cricket now?

Sachin has played 200 Test matches, which is an unprecedented number in Test cricket. He is also the only player to have 100 centuries on the international stage. Sachin holds numerous records. As a result, he is considered to be the God of Cricket. Sachin played well with his biggest cricket bats.