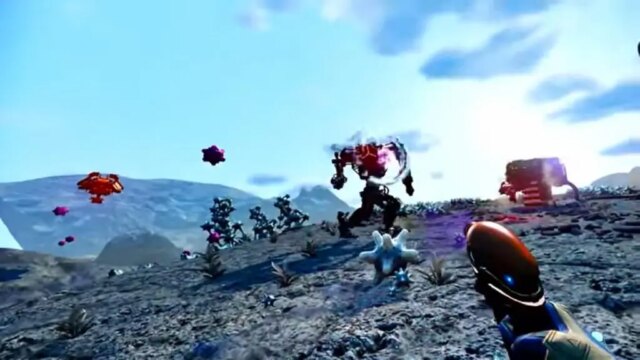 No Man’s Sky is the perfect game for sci-fi lovers and first-person shooter lovers alike, this game has a little bit of everything for everybody! One of the best things in this game, however, like in most games, is the awesome weapons. Whether you like to collect them just to have them, or are just hunting for the perfect multi-tool weapons in No Man’s Sky, you’ve come to the right place! This guide will help you determine which multi-tool weapons are worth the hype in No Man’s Sky!

Who doesn’t love grenade launchers? If you want an awesome-looking weapon with a high damage output in No Man’s Sky, you have to get the Plasma Launcher! Grenade-launcher-like weapons are always the best choice in video games, and No Man’s Sky is no different. This hefty weapon can take down even the heaviest of armored doors, it will take down enemies with no problem!

The only downside to Plasma Launchers is their inefficiency; if you’re not used to using one, it can be difficult to prioritize loading and aiming this weapon while avoiding other enemies. Once you’ve used this weapon a few times and get a feel for how it operates, however, it can be one of the most dangerous multi-tool weapons in the entire game! With this plasma grenade launcher at your side, you’ll become an unstoppable, grenade-chucking machine (and who wouldn’t want that??)!

Flamethrowers, in any game, will always be the best weapons, hands down. No one has ever seen a flamethrower as a weapon option in a game and not immediately chosen it; flamethrowers conquer the video game battlefield, and No Man’s Sky is no different! The Incinerator is amazing for those who love close-quarter combat, and for anyone who loves dealing a lot of damage in the coolest way possible!

The only downside to this weapon is that it’s actually no longer available via normal methods. Some players may still possess this weapon if they’ve had the game for a long time, however, and it does still come pre-installed on many multi-tool weapons now. Although this firey weapon is even more difficult to get your hands on now than ever, it can still go down in history as one of the greatest multi-tool weapons in the entire history of No Man’s Sky.

Related
Where Is The Secret Door In Disney Dreamlight Valley?

Any weapon that has the word “canon” in it has got to be good, and the Neutron Cannon multi-tool weapon in No Man’s Sky definitely does not disappoint. Everybody loves canons, and brightly-colored handheld canons are even better! Truthfully, the Neutron Cannon is more of a shotgun-type weapon, but it may as well be a real canon with how much damage it deals.

This weapon comes with two firing modes, and it’s fantastic for dealing with a lot of enemies all at once. If you need a powerful weapon that deals massive area damage, then you need the Neutron Cannon! The only potential downside to this weapon comes in the form of charging times when you have to wait before firing again. However, these temporary moments of downtime can easily be navigated around once you’ve gotten used to the weapon.

The Scatter Blaster is one of the most popular, classic multi-tool weapons in No Man’s Sky (also it’s just really fun to say). This gun has the power to one-shot enemies, and once it’s fully upgraded, you’ll never have to worry about losing a fight again (mostly)! The Scatter Blaster may not look as cool as other weapons on this list (especially the Neutron Cannon), but it’s easily one of the most powerful.

This gun has the added benefit of being excellent at close-range combat and at long-range combat, although you’ll probably have an easier time killing enemies at close-range. This gun is unbelievably powerful, but trying to aim with it to kill far away enemies is a lot more difficult than it needs to be. If you’ve been using this gun for a long time and you’ve got a feel for how it works, however, this probably won’t be an issue for you.

This multi-tool weapon in No Man’s Sky just sounds cool, it would be worth collecting even if it wasn’t an amazing weapon! The Blaze Javelin is considered by many to be one of the best weapons in the game, if you don’t have this gun already, you definitely need to look into getting it. Also, not that it contributes to the effectiveness of the weapon or anything, but the Blaze Javelin looks just as cool as it sounds! The appearance of weapons doesn’t affect their effectiveness on the battlefield, but it’s always nice to know you’re killing things with epic-looking weapons.

The Blaze Javelin is the perfect weapon for those who love to murder their enemies in long-range combat rather than close-range. This weapon is essentially a sniper rifle, it doesn’t take much to take your enemy down once you start shooting! In fact, the further your shot travels, the more damage is dealt to the enemy it hits; if you love picking your enemies off one-by-one while avoiding the bloodthirsty hordes of other enemies, you definitely need to get the Blaze Javelin in No Man’s Sky!

This weapon does exactly what you think it does: the Paralysis Morter is your go-to weapon for all of your paralysis needs! This gun may not be lethal on its own, but it can certainly become lethal in the right hands! After all, what else is there to do to a paralyzed enemy but kill it? You won’t have to worry about any of your enemies retaliating if they’re all paralyzed! This weapon is great for people who love to strategize before running off into battle.

You can paralyze much more than just a single enemy at once with this weapon as well; you can paralyze entire hordes of enemies with the Paralysis Morter. Once they’re all incapacitated, crushing them beneath your combat-savvy heel will be unbelievably easy (and satisfying). This is definitely one of the best strategic weapons in the game, crushing your enemies will never be difficult again as long as you’ve got a Paralysis Morter on hand!

Have you ever wanted to blow things up and kill all of your opponents at the same time?? Of course you have! There’s no better weapon to achieve that dream with than the Geology Cannon! The Geology Cannon is pretty self-explanatory, but for those of you who weren’t aware, this gun blows massive holes into the planet’s crust when you fire it. Make sure you’re out of the blast radius when you fire this thing!

Related
How to Open Plort Gates in Slime Rancher 2

Anything unlucky enough to be caught in the explosion from a Geology Cannon is almost certainly going to be dead. This is the perfect multi-tool weapon in No Man’s Sky for taking out multiple enemies all at once, with cool explosions no less! Not only can this canon deal heft amounts of damage to enemies, but it also creates giant craters in the ground that make great places to hide while you reload. It takes a bit of skill and effort to learn how to use this gun properly, but once you get used to using it, you’ll be an unstoppable killing machine!

> Best Weapons to Use in Saints Row

Everyone loves multi-tool weapons in No Man’s Sky, their strength and versatility make them extremely valuable on the battlefield! If you’re new to No Man’s Sky and aren’t sure which weapons you want to collect yet, just try any of the amazing multi-tool weapons on this list and decide for yourself which to stick with! Be sure to check out GamerJournalist’s other numerous guides on No Man’s Sky if you ever get stuck in the game.