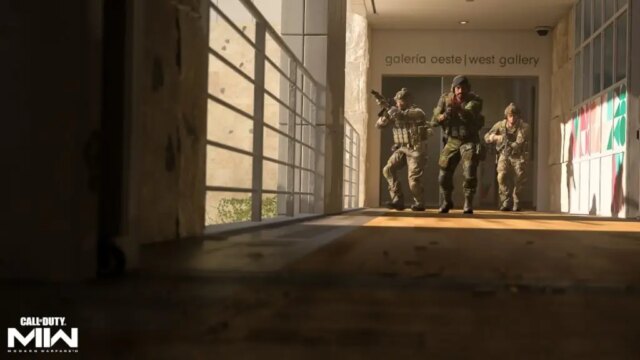 The Call of Duty Next Showcase event really brought the heat with what Activision and Infinity Ward were serving, especially for Modern Warfare 2‘s Multiplayer and Warzone 2.0. This looks to truly be the game that revolutionizes the franchise, even further than what was accomplished with the fantastic Modern Warfare (2019).

This next iteration of Call of Duty Multiplayer will see improvements to every single aspect of how players are going to take on the competition on the battlefield. So, without wasting any more time, let’s just get into the meat of it all!

There is a lot to unpack about the new improvements and other flourishes coming to Modern Warfare 2’s Multiplayer. From how guns are used, movement, maps, and even new game modes, there’s a lot to be excited about ahead of MW2’s launch on October 28th.

Gunsmith is seeing a complete overhaul, as well as how guns are actually going to be put together across the board. Weapon unlocks are a lot more universal, with there being attachments that can be used across various types of weapons. This makes unlocks less of a grind and gives players a chance to really take ownership over their loadouts.

Additionally, guns can really be reworked to how a player wants to use them, effectively changing how a gun receiver may typically be used. Want to turn an AR into an SMG? You can do that! During the event, it was said that receivers are basically the base of the tree with the attachments serving as branches, and you can put most anything on to transform it into the gun you want it to be.

Maps have been more finely tuned to give players a satisfying experience no matter their gameplay behaviors. There were two full maps shown off during the event, a large one called Sarrif Bay; a harbor town that utilizes various types of locals in one place as well as a hard focus on using the water around it for strategizing, and the other, a smaller map called Mercado Las Almas; a fast-paced, tightly crafted city for players to traverse and rack kills up in.

Modern Warfare 2 will also see some truly ambitious new game modes. The first is called Invasion and serves as a Team Deathmatch playground of sorts that allows two teams consisting of 20 players and 20 bots to fill the streets of a massive map and duke it out until the team with the most kills wins.

The other game mode shown was called Prison Rescue and has two teams working against each other to try and kidnap each one’s prisoner and exfil them successfully. This mode seems to be both parts Capture the Flag and Search and Destroy, as once a prisoner is taken, it becomes a mission of whether the attacking team can exfil before the defending team can take back their prisoner.

The last teased aspect was Special Ops. Nothing was shown though it was teased that the gameplay for this mode would be hugely improved, warranting a lot more players to check it out. This mode will be coming to the game post-launch.

If you’re looking into getting into Sarrif Bay and Mercado Las Almas soon, the Early Access beta for folks who pre-ordered the game on PlayStation consoles can begin dropping in between 9/16-9/17, with the Open Beta for PlayStation running from 9/18-/9/20.

Related
How to Check the FUT Club Record in FIFA 23

Everything Else to Know About Modern Warfare 2 Multiplayer

Water will play a significant role in MW2 as traversing through it will include swimming and boating, as well as new mechanics to shoot while submerged or skimming across the top. In addition to that, movement is also retooled to make gun movement more realistic, and the ability to peak over objects, mantel them, dolphin diving, and even something called ledge-hang.

There are also going to be a whole bunch of new gadgets as well as changes to ones already established. There’s the Shock Stick, Drill Charge, an Inflatable Dummy, DDoS, and even a Tac-Cam. The thing getting the biggest nerf is the Heartbeat Sensor as it will now run off of batteries that will deplete over time.

The last cool tidbit is that Call of Duty’s cross-progression ecosystem will continue to run between Modern Warfare 2, Warzone 2.0, and Warzone Mobile, keeping your progress of weapons and such current, no matter what game you’re playing.

That is absolutely everything to know about the changes coming to Modern Warfare 2’s Multiplayer!

> How to Get the Oni Operator in Modern Warfare 2

Does Grounded Have Split Screen Co-Op?

Why is Overwatch 2 Recording Voice Chat?