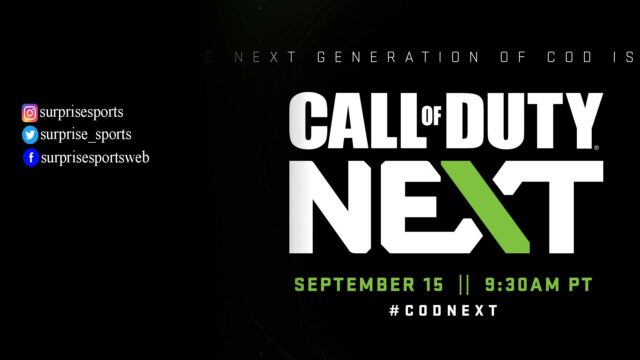 The big day is almost upon us. Activision and Infinity Ward are set to reveal the future of Call Of Duty as a franchise during the Call Of Duty Next event this week.

Call of Duty Next: Start Time, How To Live Stream, Full Events Details

Fans can tune in to the official Call of Duty Twitch channel or Call of Duty YouTube channel for a detailed rundown of all of the franchise’s key innovations. Otherwise, they can watch the event broadcast by any of their favorite streamers providing coverage of the event.

The live stream will introduce fans of the shooter franchise to a slew of new intel on three upcoming games in the Call Of Duty universe:

Modern Warfare 2 will get its big multiplayer reveal, and players will learn more about the modes, maps, cooperative play coming to the game, various innovations to gameplay, and much more.

Warzone 2.0 is the new, independent free-to-play battle royale positioned to take over for the current Warzone. During the Call Of Duty Next event, we’ll learn about the new map, gameplay, and next-gen features.

Warzone Mobile is a new free-to-play Android and iOS battle royale game that is rumored to share some elements of cross-play and/or cross-progression with Warzone 2.0. We’ll learn about the game and how it ties into the other titles during the next event.

Other key details players will learn about include:

The future of the Call Of Duty franchise, including how all future games and studios—across Black Ops, Modern Warfare and beyond—will be made on the same unified game engine.

Related
How to Get Jellystone in Slime Rancher 2

Important info about the Modern Warfare II Beta that kicks off this weekend.

Gameplay in action as over 150 popular streamers will go head-to-head and play the game(s) live. (I’m not 100% sure if this includes both MWII and Warzone II but I get the feeling we’ll see both).

If you’re wondering what to expect, you won’t be disappointed. On 12th September 2022, Call of Duty: Next will provide “in-depth information on Call of Duty®: Modern Warfare® II Multiplayer, the next Call of Duty®: Warzone™, and Call of Duty® Warzone™: Mobile” game titles.

Attending the event are also several prominent content creators and streamers (over 150, to be exact) and guest speakers from the many Call of Duty development studios. In addition, Infinity Ward is also expected to make other surprise reveals and announcements.

In this regard, you don’t want to miss the live stream. COD: Next will be broadcast on the official Call of Duty Twitch and YouTube channels on 15th September 2022 at 9:30 AM PST.

What to Expect During Call of Duty Next Event

Infinity Ward’s event showcase will include the full multiplayer reveal for Modern Warfare 2, including real-time content creators playing the game. There will also be information provided on Warzone 2, as this sequel is scheduled to drop later this year after the release of Modern Warfare 2. More details will be revealed on the upcoming mobile version of Call of Duty: Warzone, a game previously known as Project Aurora.

Activision also mentioned that Call of Duty Next will discuss “what the imminent future of Call of Duty will look like.” This could include details on what to expect for Call of Duty over the next two years, as it was previously reported that the franchise will not release a new Call of Duty premium game in 2023. Treyarch’s new game will come out in 2024, and images are already leaking in early development.

Related
How to Open Plort Gates in Slime Rancher 2

The publisher also teased that the Call of Duty Next event will include additional surprises and information on something currently “redacted,” which could be the previously leaked DMZ mode for Modern Warfare 2.