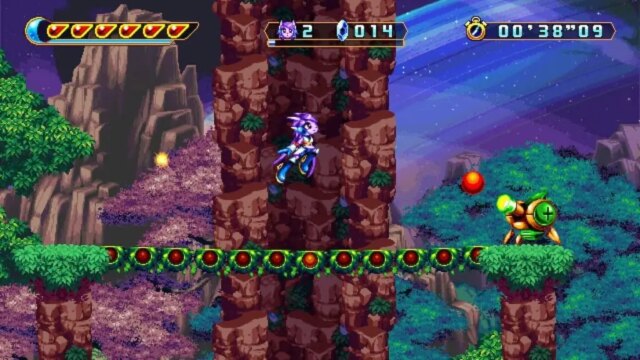 The original Freedom Planet offered a clever blend of high-speed Sonic-style platforming and light character-action combat. In Freedom Planet 2, those mechanics have been further refined for characters new and returning, each with updated moves and abilities. Here are the playable characters in Freedom Planet 2 and their moves.

Freedom Planet 2 features four playable characters, each with their own perspective in the game’s story. Three of these characters return from the first game, and they are joined by one new character.

Our main hero, and one of the last dragons on Avalice. With her dragon magic and physiology, Lilac possesses magically-enhanced strength and speed, allowing her to zip through levels at a pace that’d make a hedgehog proud.

> How to Unlock Mirror Mode in Sonic Origins

A ninja wildcat and Lilac’s best friend. Carol uses her feline agility to pounce and slash across long distances. She’s brought back her signature motorcycle, as well as her new Jump Disc weapon.

An adorable Hound puppy with a talent for alchemy. Milla was a bit fragile in the first game, but after some training, she’s learned to channel her Phantom Cube abilities into a new kung-fu style.

> Where to Find All The Emeralds in Sonic Origins

Frost Knight, advisor to the Magister of Shang Tu, and a generally unpleasant person. Neera and Lilac were enemies due to the circumstances of the first game, but recent events have forced them to work together.

Remember, every character has their own story, so you’ll need to master all four of them to experience the full content of Freedom Planet 2!