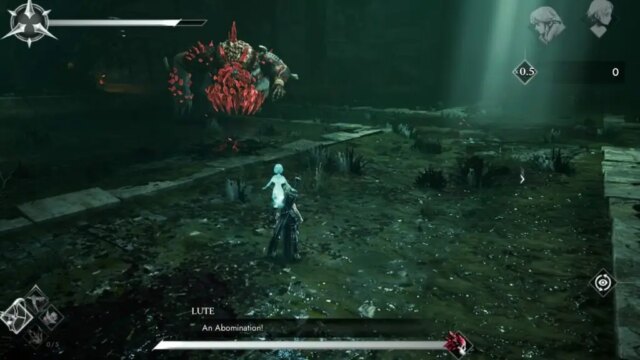 The Abomination boss fight is the second one to be encountered in Soulstice. Since your progression through the game at this point has now unlocked even more weapons and gameplay mechanics, there’s so much more going on in this second run-in with a powerful foe with a hefty health bar. Here’s how we tackled him.

How to defeat the Abomination

At this point in your playthrough, you will have unlocked two more weapons for Briar since the Arrowhead boss fight. Alongside the Ashen Enforcer and Hand of Retribution that you can bring out on the fly, there is now the addition of the Hallowed Hunter, a bow and arrow and the Tearing Penance, a whip. Both are extremely helpful with this boss fight. Remember to have Lute’s Banishment Field up by tapping RT whenever you aim for the Abomination since its crimson crystals all over its body protects it from any other attack forms.

Firstly, there will be runts running about in the fight that you will want to take down so that you can focus on the Abomination alone. Do this to also build up Unity points for the potential to unleash Rapture state when Unity is high. You’ll want to activate this when there are more opponents on the screen other than the Abomination for a quick sweep of the battlefield, or when the Abomination has been exhausted and in an inactive state for a few seconds to bring double the pain onto its temporarily incapacitated form.

Remember to avoid getting knocked down to keep your Unity points increasing. Have Lute counter the right enemies at the right time with the ‘B’ input when prompted and keep manually attacking with Briar without getting hit while switching out weapons on the go.

When in Unity by pressing the RT and LT buttons simultaneously when the prompt appears at the top right of the sisters’ frames, keep attacking with combos to successfully pull off Synergy attacks that you have unlocked at this point. Finish off the Unity attack with your strongest move in that form by tapping RT and LT at the same time again when prompted.

Related
How to Play Shatterline Co-Op on PC

You do not have to intend to unleash the Rapture state however, but it’s helpful to aim for that to obtain a higher chapter score by taking the Abomination down quicker. To ensure the successful beating down of the Abomination no matter the grade, utilise the Hallowed Hunter to maintain distance between Briar and Lute against the Abomination. He can reach a long distance with heavy strikes if and when getting too close to it. If you can dodge and counter well however, keep up with heavy hits using the Ashen Enforcer to get his health bar down quickly.

Remember to keep changing out your weapons for even more bonus points however, so changing up your distance is more than viable for better chapter score results. You will be changing out whatever close combat weapon you prefer to use however because the Abomination is Possessed, meaning that Wraiths control it. When downing the Abomination when it is low and about to perish completely, Wraiths will appear, and they will have to be taken down to complete the boss encounter.

Since these Wraiths are airborne, using the Hallowed Hunter is the easiest and most effective way to bring them down to ground level to pummel them with a harder hitting weapon such as the Ashen Enforcer. You can instead jump into the air and target them, but this can be tricky if you fail to lock onto them quickly enough. Remember to switch out from the Banishment Field into the Evocation Field with LT when aiming for the Wraiths since this field is the only one that makes it possible to connect to them.

He’ll be down in no time!

> How to defeat the Weavers boss fight in Soulstice