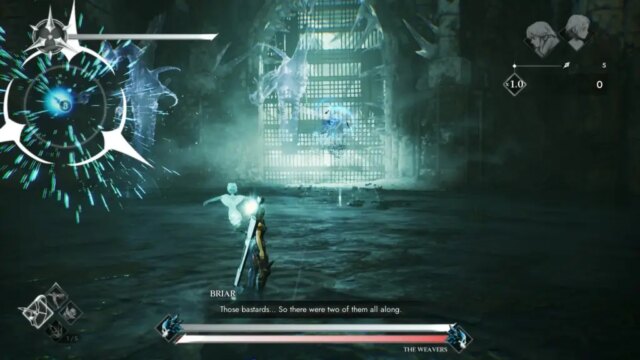 The Weavers fight is the third boss fight in Soulstice. They are an extremely pesky foe to face in battle because they are a pair of Weavers unlike those appearing on their own before this encounter. Here’s how to tackle them effectively, as found in Chapter 11.

How to Defeat the Two Weavers

The trick with the Weavers is a simple one and is quickly and easily recognized when taking down either one of them. If you are not keeping both of the Weavers at the same amount of health through the battle, taking one of them down too soon before being able to defeat the other one will result in disaster. This is because the other still floating Weaver will revive its downed comrade since it still needs too many hits to bring it down at the same time to prevent it from reviving the other one.

Now that you know this as its one and only trick then it should be easy going from there. Just remember to have Lute’s Evocation Field on during this fight with a tap of the LT button but turn it off before Lute overcharges. She will still tend to do this frequently around the time of this boss fight since she will need to be powered up in her skill tree with improvements later on in the game to improve her Entropy level. Do not let her overcharge during the Weavers’ fight because she is highly important in blocking the many hits the Weavers do simultaneously.

As we have mentioned before and because they are airborne opponents, using the Hallowed Hunter here is a strong move, but remember to get creative and agile with your fighting style by utilizing all the weapons for a better chapter score. As always, avoid and counter with Lute’s slow move (tap ‘B’) as frequently as possible to create openings and dodge more effectively.

> How to defeat the two Sir Donovan boss fights in Soulstice