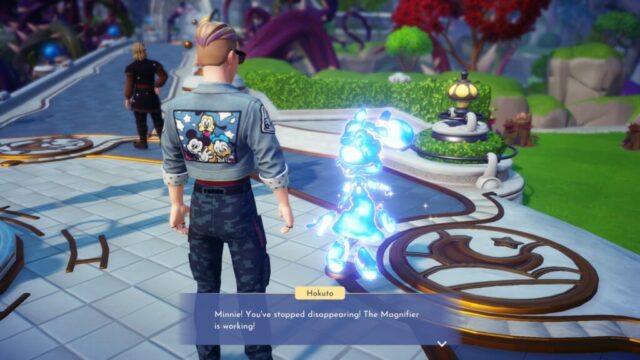 Making fun of Mickey Mouse’s sad wife guy storyline in Disney Dreamlight Valley has been a source of catharsis for me in these dark times. Unfortunately that fun is coming to an end, as I have brought Minnie Mouse back from the weird purgatory dimension or whatever the heck is going on in this game. Now I simply have Minnie Mouse strolling around the village like any other regular character I’ve unlocked. All I can do is look for a new gag, and explain in guide form how I unlocked Minnie for folks in need of information.

To unlock Minnie Mouse in Disney Dreamlight Valley, you simply need to progress through Mickey Mouse’s quest line. Advance the story, hang out with Mickey, so on and so forth until you get the Memory Magnification quest. Once you’re there, you know you’re about to restore corporeal form to Minnie. And to do that you’ll have to craft an item called the Dreamlight Magnifier.

To make a Dreamlight Magnifier you’ll only need a few ingredients. You need one emerald, two pieces of hardwood and six tinkering parts. If you don’t know, tinkering parts have to be crafted themselves, which requires two iron ingots each. And an iron ingot requires five pieces of iron ore and one piece of coal ore. So that’s a fair amount of iron you’ll need. If you’re out, the best place to get more is mining in the Glade biome.

Once you have the device you need, you’ll take it to Minnie Mouse’s weird ghost form, which roots her in place but still doesn’t provide her with flesh and stuff. For that you’ll need to bring back her house. Luckily there isn’t much you have to do with that, since speaking with Mickey simply adds Minnie’s house to your furniture options. But you will need 5,000 coins in order to have it built. Once you’re done that, Minnie will regain her physical form and go about her business like everyone else in your village of cartoon buffoons.

Much like unlocking Donald Duck, unlocking Minnie Mouse is simply a matter of following quest lines. There aren’t any tricks or mysteries to solve, just dialogue to scroll through and ingredients to gather.