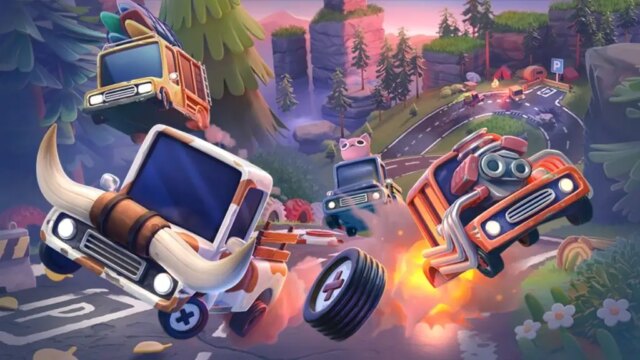 When I had first heard about You Suck at Parking, I was instantly intrigued by its puzzle-like gameplay, which combines driving cars with kooky courses that’ll have you navigating through them in order to find its hidden parking spots. It’s an easy sell, one that I was over the moon to get a chance to play. And honestly, the driving felt satisfying and the online multiplayer was really engaging. But, there was something that just didn’t seem to sit right with me as I continued to play.

Now having actually played it for a while now, I come out of my experience really torn. While I love You Suck at Parking’s gameplay, there’s a true overusage of monetization and microtransactions in this game that really sucks the fun away from it. It shines a negative light on Happy Volcano, the company that both developed and published the game, that poses the idea that the almighty dollar is what’s most important. Though a fun game, it’s also a very shallow one in its execution, and the microtransactions really bring that feeling to the surface.

Gameplay That’ll Have You Try, Try, and Try Again

What I loved about my experience with You Suck at Parking was its tightly crafted gameplay. The loop or trying to navigate its courses and park my car as perfectly as I possibly could was something that kept me engaged for hours while playing. Its controls are easy to master though tows a great difficult curve by the its camera floating at an odd view.

Related
The 5 Best Things About The Modern Warfare 2 Beta

Most of the courses in You Suck at Parking also felt unique from one to the other, with none really making me feel as if I’d ever really been there before. There’s a lot of creativity that went into how the developers executed these courses and levels, and it’s seen throughout. From differences in looks, to the various obstacles or methods of completing them were, nothing was a copy.

Something I couldn’t shake was the feeling that it was very similar to the type of games you’d see on mobile devices like Cut the Rope where you have these levels to complete, and you feel compelled to beat each course the best you can to get the highest score. Here, you’ll be managing time whilst also trying to get a Perfect Park across the board in order to fully 100% a level. This is the kind of addicting gameplay I love.

Online Multiplayer is the Standout

While I loved what single-player had to offer, it’s the online multiplayer that really pulls this game together. It’s a simple party game where each player races to park the available spots as quick as possible, but there’s almost a battle royale vibe to it as players really are driving frantically in order to get to those spaces., either pushing other drivers around or blowing themselves up mistakenly.

The courses here are especially fun to play as they really do feel like a boss that all players are actively trying to take down at once. Each has its own hazards of course, but also some character to them. Though all players are going against each other, you’re almost rooting for everyone to get all spots parked before the timer runs out. And that’s special.

> How to Unlock More Levels in You Suck at Parking

When compared to the mobile games I mentioned above, this game feels on par. But when you take into consideration that this is a full-release game with a $19.99 price sticker on it, you almost wonder why there isn’t more. The reason being, this game is basically in an early access state, unofficially.

Related
How to Use Gamelists on PS5

When you boot this game up, you’re treated with various different messages from the creative team talking about future additions to the game as well as pushing you to check out the game’s roadmap and the Discord server for more update info.

The problem here is, this makes the game feel as if it were in early access or a beta state. What makes this worse is that players can’t even play with friends online at launch. This is a feature coming along down the line and the devs actively advertise as a future feature on the game’s main menu.

It just astounds me that there are games that are allowed to be released in a half-baked state, simply because they’re live-service games. You see it time and time again that these live-serivce games don’t release how they’re meant to but eventually become the game they were meant to be as opposed to launching as a full product.

That leads me to this game’s real problem, greed. Though I’m not one that really gets too unsettled by monetization or microtransactions, this game has an exuberant amount even though it isn’t free-to-play and has a larger focus on single-player.

Players can’t really customize their measly 3 cars all that much as most of the fun customization options are either locked away behind a premium season pass or sold in bundles via the in-game store for real-world cash. It’s just odd that a game that has such a stronger focus on single-player and cars, doesn’t really give you anything in way of unlocks with the price of admission.

It would’ve been really cool to be able to play these courses and levels to earn some great customization options for cars, and even more vehicles to add to my garage. Instead, all I get is the chance to level up in the season pass which I’ll have to pay for just to get what I earned in single-player. How does that make any sense?

This Game Should Not Have a Price Tag

In all honesty, had this game released free-to-play, none of these issues would have really bothered me, but it’s the reckless use of monitization that can truly sour a user’s experience if not handled correctly. And unfortunately, that’s the case for You Suck at Parking.

You Suck at Parking really seems to suffer from an identity crisis. It doesn’t want to be a free-to-play game, though pushes a season pass and store bundles, it pushes single-player but doesn’t actually reward players for playing, and it wants to be a live-service title but charges players just to get through the door. None of this lines up properly.

It’s a real shame as this game could have gotten a different reaction, from me at least, if it didn’t abhorrently use dollar signs throughout the game. You simply cannot come out with an arcadey game like this, charge people money for it, and not reward them for playing.

So, unless you can play this game on Xbox Game Pass, I’d say to pass on it until it either goes free-to-play or the developers update it down the line to include more features and hopefully unlocks for playing single-player. Until then, I’d pass on it.

You Suck at Parking is available now on Xbox Series X|S, Xbox One, PlayStation 5, PlayStation 4, Nintendo Switch, and PC.

For more content on You Suck at Parking, be sure to check out our other articles covering it!