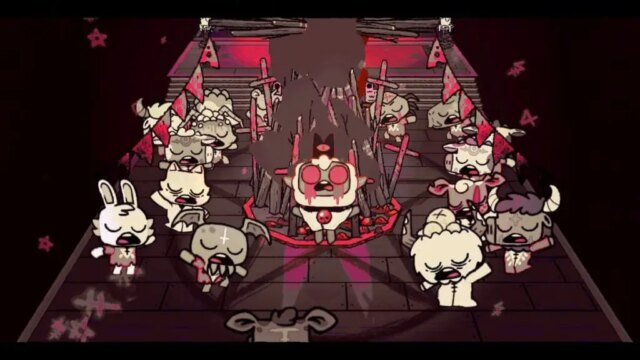 Follower quests can seem tedious to complete in Cult of the Lamb, but many of these quests can give you valuable rewards, including (but not limited to) extra followers! When asked, these quest-giving followers will inform you that there are followers that want to join your cult (for some reason), and will ask you if you’d like to let them join.

Once you accept their quest, you should be given extra followers right on the spot! You can even get multiple followers at once with this method! This is by far one of the easiest methods to obtain followers in Cult of the Lamb, though it isn’t always reliable because you can never guarantee when another follower-related quest will come along.

Go on Crusades to Darkwood

Darkwood is the first dungeon you’re allowed to crusade in in Cult of the Lamb. Because of this, it’s one of the best areas to obtain more followers in early-game! You’ll need to complete this dungeon anyway if you want to beat the game, so you might as well pick up a few followers while you’re at it.

You can find followers lurking around everywhere in this dungeon, you hardly even need to look! Since this dungeon is available so early in the game, it’s also one of the best places to farm up some new follower forms. If you’re still in the early-game phases and only have a few follower forms to choose from, try going on a few quick crusades to the Darkwood dungeon to expand your collection!

Related
How To Unlock Characters in Omega Strikers

Buying followers from Helob is one of the best ways to get followers in Cult of the Lamb, especially if you’ve got some extra cash to spare. Helob will offer you many different types of followers for varying prices, but they’re usually not too expensive (thankfully). He’ll even give you elder followers for free!

You can grow your flock exponentially with almost no effort as long as you keep buying from Helob; he has an unlimited supply of critters (don’t ask where he gets them from) and is always willing to part with a few! This method is also another great way to collect more follower forms, as the followers he sells you are completely randomized.

Go on Crusades to Anura

Anura is another early-game dungeon that needs to be beaten in order to complete the game, so you might as well pick up as many followers as you can while you’re at it.

Anura even has dungeon-specific follower forms that you definitely don’t want to miss out on, not to mention the fact that you can get oodles of menticide mushrooms and spores from this dungeon as well! This dungeon is similar to the Darkwood dungeon in the sense that it’s relatively easy to beat; you won’t have to worry about losing any of the precious followers you’ve collected by dying in the middle of your crusade.

Defeating bosses and taking down heretics is the whole point of Cult of the Lamb, so it makes sense that you’re given extra rewards for doing it. You’re rewarded with many resources and blueprints at the end of a crusade, but you also have the potential to be rewarded with incredibly strong followers! Once you reach the end of an area after a crusade, you’ll have to deal with that area’s resident heretic.

Defeating them can be difficult, but nowhere near as difficult as defeating one of the Bishops or the final boss. Once you defeat one of the heretics in an area, they’ll shrink down to a smaller (and cuter!) version of themselves and become frightened enough to want to join your cult! You can get up to four heretic followers in one dungeon alone, so this method is definitely a profitable way to collect followers in Cult of the Lamb.

Go on Crusades to Anchordeep

The Anchordeep is an enjoyable, ocean-themed dungeon in Cult of the Lamb. This dungeon isn’t too difficult, but it’s definitely not as easy as the Darkwood Dungeon. That being said, however, this dungeon is still flush with followers that are yours for the taking! If you’re willing to take the plunge into this watery hellscape, you’ll be rich with followers in no time!

This dungeon is also the only dungeon where crystal shards can be found, which can be used for quests and for building grand decorations for your base! Every dungeon has its exclusive resources, but this dungeon’s resource (crystal shards) is worth challenging monsters for, even if you don’t need the followers.

While crusading in the deep dark depths of a dungeon, you may come across a sacrificial ritual or two. Rather than pass these opportunities by, you should definitely take advantage of them (free followers)! Interrupting these rituals and fighting the cultists can be a hassle, but it’s definitely worth it to get a free follower.

You can find multiple sacrificial rituals while exploring dungeons, which means you can get multiple new followers all in one go! All you need to do is keep going on crusades; these sacrificial rituals are far from rare, they practically drop themselves right into your lap! This is one of the best methods for obtaining new followers in Cult of the Lamb, simply because there’s not much extra work that needs to be done to complete it.

Go on Crusades to Silk Cradle

The Silk Cradle is one of the more dangerous dungeons that Cult of the Lamb has to offer, but that only means the hard-won rewards will be that much sweeter. The Silk Cradle dungeon is especially dense with followers (for whatever reason), so it’s definitely a good dungeon for obtaining as many followers as you can hold!

Helob likes to wander around in there with his living wares, and you can find multiple sacrificial rituals going on in this dungeon as well. Furthermore, there are always heretics to be found and defeated in these dungeons, and the Silk Cradle dungeon is no exception. Like with the other dungeons, you can get up to four heretic followers in Silk Cradle, which only maximizes your follower-collecting potential for this dungeon!

Find and Recruit Followers in Dungeons

Related
How to Play Multiplayer in You Suck at Parking

If you choose to listen and agree, they will be willing to join your cult. These followers may be more likely to dissent in the future, but that’s a problem for another day! What matters is that you’ve got another follower under your belt! If you disagree with them, however, they’ll go into attack mode and you’ll have to kill them. There are other ways similar to this that you can collect followers, but this is usually the most common scenario.

Go on Crusades to The Gateway (and Recruit The One Who Waits!)

This method won’t get you the most followers, but it will get you one very powerful follower. Once you defeat all four bishops, you’ll be able to open the final dungeon door to The Gateway. The Gateway isn’t really a dungeon, it’s the evil, life-sucking home of The One Who Waits. You won’t encounter any rooms or card-dealing birds in The Gateway, just the vengeful god that once was righteous and his two remaining followers. You can either kneel before him and give over your life, and all of your followers’ lives, to appease him, or, you can refuse to kneel. Refusing to kneel will begin the final battle of the game, with the final boss being The One Who Waits.

> How Many Followers Can You Have in Cult of the Lamb?

It’s a harrowing battle, but once you defeat him, he does not die (unlike the four Bishops). Instead of dying, The One Who Waits will shrink down into a smaller version of himself, and you’ll be able to recruit him into your cult by choosing to spare him. The One Who Waits has the potential to become a very powerful follower, especially since he has the Immortal trait, which means he’ll never grow old and will never die! This method is difficult and requires you to beat literally the entire game, but you get an immortal god as a follower if you complete it!