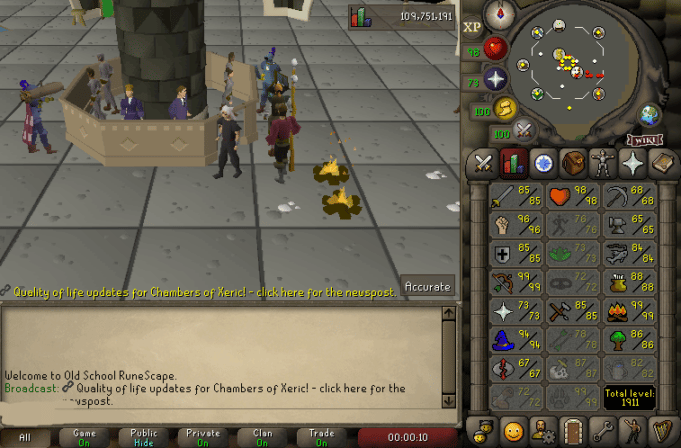 No matter how much you think you know about RuneScape, there is always something new to learn. This 20-year-old pixelated game is still full of surprises and novel methods. That is why OSRS is the oldest and largest MMORPG out there. People keep playing through the years because, in addition to leveling to the max in every domain, there is always something new to try out.

That being said, all of this allows you to play the game in various ways and choose what
activities you want to do moment to moment – this comes with a lot of decision-making and many bad ones. So today, we want to review some of the top mistakes that OSRS players make and how to avoid them. We hope that this helps to improve your OSRS experience!

OSRS scammers are as old as RuneScape itself. And they are still very prevalent within the game, mostly because people keep falling for them. Scamming in OSRS is stealing money items or accounts from another player by deceiving them. Scammers use a wide range of methods to trick players in the game, such as luring them to dangerous places, gaining their trust over long periods, then stealing their items, exploiting flaws in the trading system, and exploiting glitches.

There are multiple things to watch out for to avoid falling into this trap. The first and obvious thing you could do is not to talk to strangers; turn off public chat. However, if you want to avoid doing this, be vigilant of people deceiving you. If the trade seems too good to be true, it’s probably a scam. Do not follow strangers to places when they ask you for some “reward.” Only trade when it’s possible to trade both items at once – watch out for scammers asking you to give your item to them first.

If someone scams you or attempts to, you can report them. However, your items will never be returned to you once stolen, even if the scammer is punished.

While it is exceptionally tempting for newer players to train slayer or go bossing, as these are action-packed and fun, it is crucial not to miss out on doing your quests. Some beginner quests give you massive experience rewards that would otherwise take you hours if you were trying to level up the skills individually. This is important in the late game, too, as master and grandmaster quests essentially unlock the whole game for you. Another important point to note is that if you are still struggling, you could buy a more developed OSRS account from ChicksGold to progress faster.

Quests also offer great unlocks for training methods. This will allow you to gain experience more quickly and efficiently. For example, Dragon Slayer 2 allows you to craft the wrath runes, which, under certain circumstances, are the best skilling money-making method in the entire game.

We are not suggesting that you speedrun all your quests as soon as you begin the game, but do not overlook them. The amount of knowledge, utility items, and experience you will gain from quests are unparalleled. They will undoubtedly help you progress faster and more efficiently through the game.

3- Don’t be an Unbalanced Warrior

The thing we are going to mention now is a widespread phenomenon amongst RuneScape
players, especially newer ones. You may have seen that some players have high combat levels juxtaposed with low slayer levels. This comes from the standard misconception players have that higher combat levels mean slayer will go by quicker as you can deal more damage, killing monsters quicker and getting more experience per hour.

While this may be technically true, if you think about it a little more deeply, training combat means that you will be working double for the same purpose, as most of the things you do will level up both of these skills. And by the type you hit 99 slayers, you have probably maxed out your account too.

We all know that goal setting is an extremely important part of almost every aspect of life. It is also a significant part of RuneScape. While nearly everyone will have some goal in mind while starting, like “I want to max out my account,” it is wise to take a step back to examine your goals and set better, more attainable ones.

If your only goal when starting is to max out your account, chances are you will get demoralized very quickly when you find out just how long it can take. Instead, set small, attainable goals for yourself and work daily on those. When you attain your small goal, be sure to have the next one set so you can jump right into it.

Getting a particular new cape today.
Training runecrafting for an hour every day.
● Leveling up a certain skill by 10 levels.

These goals are much more attainable and will give you a sense of achievement throughout your gaming journey. But, on the other hand, by having just one huge goal, you risk burnout from feeling like you are getting nowhere. Or that things need to be progressing faster.

The only person you are competing with is yourself. Try to train a skill for an hour, see how much experience you get, and the next time you train it for an hour, try to beat that. This is a fantastic way to make time fly by quickly and stay motivated.

These are some of the most common mistakes players make. However, there are much more. So, when you jump into OSRS again, remember to look out for the things we have mentioned here and other dangers lurking. We hope that this guide has helped!

The Rise of Online Casinos and Esports: A Perfect Match