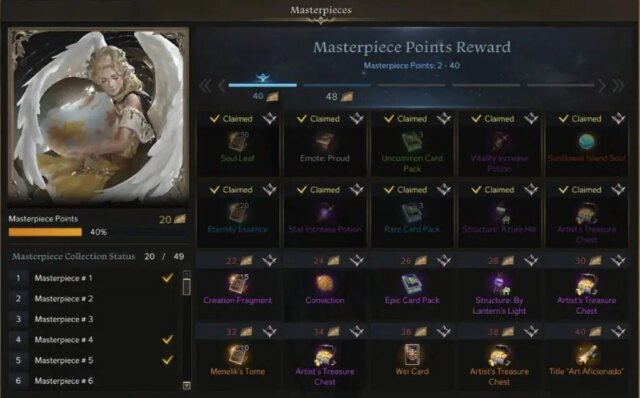 Being an MMORPG, there are a ton of ways in which players can obtain special rewards in Lost Ark. This guide will outline what Collectibles are, what Masterpieces are, and where you can exchange them.

From dangerous quests, extreme boss fights, thrilling raids, or tedious tasks, Lost Ark is home to a colossal amount of content for players to dive into. The map is an incredible size and you may even venture off on your own personal ship to remote islands to do even more tasks for extra rewards.

There is a section in the inventory that is named “Collectibles” and this contains a plethora of items for you to pick up as you journey across the world of Arkesia. Completing each section of your Collectibles will give you a reward that may be used to enhance your character.

These rewards include things like Stat Increase Potions, Vitality Increase Potions, Greater Skill Point Potions, Special Equipment, and you can even get some cool cosmetics, titles, and transformations for your character.

What are Masterpiece Collectibles in Lost Ark?

Masterpieces behave in the same way as they are a type of Collectible. There are a total of eight different Collectibles in the game and Masterpieces are one of the eight.

They may be earned by completing various tasks across Arkesia and you will inevitably pick them up as you quest and develop your character.

Where to trade in Masterpieces in Lost Ark

Once you have collected a Masterpiece, you should look to take it to Sunflower Island. Here you will come across an NPC named Alfonso Vedice and through him, you will be able to trade them in exchange for rewards.

Related
How to Use and Upgrade Your Tools in Potion Permit

Some of the Rewards consist of Soul of Sunflowers Island, 4 Philanthropist’s Caskets, Rune Val, Potions, & more. Currently, there are a total of 52 Masterpieces in the game.

Below is a list of all 52 Masterpieces and how you can obtain them.

1st – Complete the Artist in Residence Quest in Sunflower Island.

4th – 50% Completion of the Adventure Tome in East Luterra.

5th – 50% Completion of the Adventure Tome in Tortoyk.

6th – 50% Completion of the Adventure Tome in Anikka.

7th – 50% Completion of the Adventure Tome in North Vern.

8th – 40% Completion of the Adventure Tome in Shushire.

13th – Complete the Pain to Gain Quest in Liebeheim.

20th – Exchanged with Favreau for 3,300 Gienah’s Coin in Starlight Isle.

29th – Get Calvasus’s Rapport to the Trusted Stage.

30th – 40% Completion of the Adventure Tome in Rohendel.

37th – 40% Completion of the Adventure Tome in Feiton.

43rd – 40% Completion of the Adventure Tome in Punika.

46th – Obtained by Hall of the Sun Boss Rush.

49th – 60% Completion of the Adventure Tome in South Vern.

We hope you have benefitted from this guide and we wish you good luck in your endeavors to Masterpiece acquisition!

Remember, Masterpieces are not terribly difficult to obtain and you will naturally pick them up by simply playing the game. However, the easiest ways to get them are by doing Una’s Tasks and completing Secret Maps that you get from Chaos Gates.

Related
Where Is Hedge Lab in Grounded?