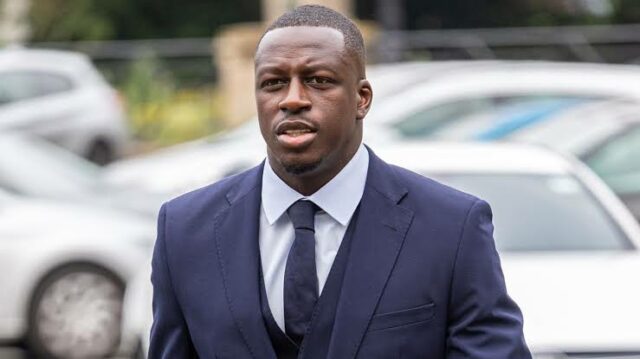 A 19-year-old victim of Benjamin Mendy’s alleged sexual abuse has revealed how she got drunk and blacked out before she was raped by Mendy’s friend and co-accused, Louis Saha Matturrie.

The woman, who was aged 19 at the time, narrated how she had gone to an apartment used by Louis Saha near Manchester City center last March.

While at the apartment, Matturie, 41, reportedly made her and her friend some drinks, but he did not use the drink himself. They unknowingly inhaled nitrous oxide gallons – typical of a party style – before she blacked out, the laser told the jury.

Although they were drunk, she did not stagger and could maintain balance. But things worsened when she took more drinks, leading to a total “blackout,” she said.

Later on, she later found herself on top of a mattress with Benjamin Mendy’s friend and accomplice on top of her, raping her.

“It was all very blurry,” she said. “I was really confused. I think as I came to consciousness he was on me. I think I was just very shocked.

“I had no idea who it was. I was still completely out of it.

“I was in an absolute state.”

After coming to her senses, the woman said she could hear her friend’s voice, dashed out of the room, and told her, “we need to go”, and they left the flat.

According to the prosecutors, Mendy is alleged to be a “predator” who, “turned the pursuit of women for sex into a game,” with many women turning out as his victims.

Mendy has denied all seven counts of rape, one count of attempted rape, and one count of sexual assault committed against six young women.

His friend and fixer, Matturie, was allegedly involved in scouting for young women who would fall victim to Mendy’s predatory run on women.

The defense team is insisting that if any sex took place involving Benjamin Mendy and Matturie, it was purely consensual with no coercion involved.

The trial was later adjourned. If the charges against Matturie are true, the 41-year-old may likely face 5 years imprisonment with life imprisonment not ruled out.

The prosecutors have ramped up a lot of witnesses to testify of the alleged murky dealings of the duo as they seek justice for the victims. Testimonies by the witnesses detail graphic scenes of alleged unwarranted assaults initiated by Mendy and his cohort.

While Mendy has been cleared of one charge of rape, his friend Matturie still stands trial for all the charges against him. How the pendulum of justice will swing is still unknown. However, there are prognostications that some charges against Matturrie may likely be dropped as his friend, Benjamin Mendy.