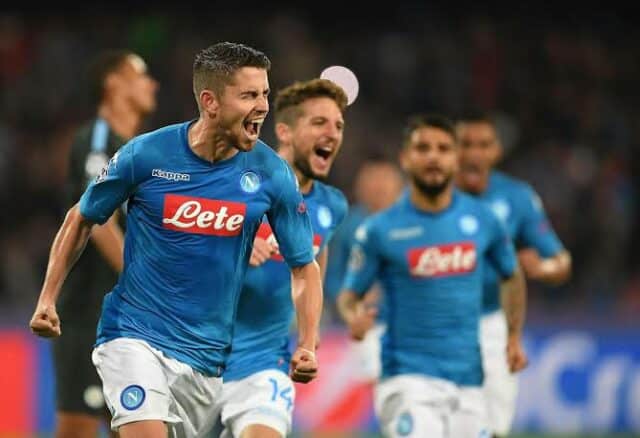 Napoli are sitting on top of the Serie A after defeating AC Milan 2-1 at San Siro in their Sunday night clash, September 18, 2022.

Over 72,000 spectators watched as AC Milan lost their first Serie A match in nine months as they Were thrashed 2-1 by Napoli at San Siro stadium.

Spalletti’s side now sits top of the league on goal difference from Atalanta, 1-0 winners at Roma; both having 17 points and three points above AC Milan who dropped down to fifth; with 14 points, after their first loss of the season.

AC Milan were the more frightening team in the first half as they were dominant but the visitors threw the first punch via a 55th-minute penalty.

Milan would have seized a 13th-minute lead if Napoli’s goalkeeper Alex Meret had not brilliantly parried Olivier Giroud’s shot onto the crossbar.

However, the absence of the suspended Rafael Leao caused Milan to lack their typical cutting edge, incorporated with a pair of awful occurrences of Pioli’s players blocking each other’s chances and thwarting Milan’s great advantages during the first half.

Meanwhile, the lead arrived for Napoli as the host got hooked after Sergino Dest from AC Milan conceded a penalty for tripping Khvicha Kvaratskhelia inside the box.

AC Milan and Napoli players clashed as Spalletti’s players got enraged after the referee initially turned a blind eye to the foul committed by Dest.

Referee Maurizio Mariani, who was oblivious of the foul had initially given a corner kick to the Partenopei which provoked the Azzurri’s anger and some of Napoli’s players and Milan’s were already taken it rough, pushing themselves and shouting at each other inside the Rossoneri’s penalty box before the referee stopped the play to check the VAR.

A penalty was eventually awarded after a satisfied VAR review by the referee, with Matteo Politano scoring despite AC Milan’s goalkeeper, Mike Maignan stretching in the right direction.

AC Milan went fiercely in search of an equalizer and stacked on the pressure, but at the other end, it was Napoli’s midfielder Zielinski who yanked a shot wide from around 20 yards.

Pioli made more changes for Milan with 25 minutes left bringing in Junior Messias and Brahim Diaz who came in place of Saelemaekers and Krunic.

Meanwhile, Theo Hernandez and Oliver Giroud had strived to combine for the equalizer on so many occasions since the first half, and with about 20 minutes left to the stoppage time, they did integrate the equalizer.

Olivier Giroud popped up with another big shot to set up a hallway finish after Theo Hernandez made one of his regular direct runs to the byline and cut back a perfect low ball to Giroud who then fired home first time with Meret unguarded and gave Milan the equalizer.

However, the joy of equalizer and the strive to get a winning goal died down for the host as Napoli gathered themselves back in front with just about 12 minutes remaining before the end of the match.

Giovanni Simeone ended up getting the winning goal for the Partenopei after aiming for an excellent cross from Mario Rui on the left flank.

Simeone made it 2-1 with his first meaningful touch, sending the ball inside Milan’s net with an excellent header in the 78th minute to the stoppage time.

Milan was far away from leveling the game to get a second equalizer as all of their final attempts went futile.

Milan’s full-back, Theo Hernandez tried to combine efforts to get the second equalizer as he tossed the ball into the box but Giroud slipped it on through to Kalulu, who misfired and hit the crossbar when he really could have scored.

Pioli’s men induced late dramas as they launched ball after ball into Napoli’s box and earned abrupt corners but Napoli fought harder to the last second to grant Milan their first league defeat since the year 2022 began.

Meanwhile, Napoli’s assistant manager Marco Domenichini who stood in for the suspended Luciano Spalletti revealed the victory against Milan didn’t come handily as his team struggled against the host rival to get the win.

He said: “It was, without doubt, a difficult match against a very good Milan,”

“We got the first 20 minutes wrong and struggled to move the ball around, then managed to find more spaces. It was again a struggle in the second half when we made mistakes, but the team showed character, and the desire to win and we are very happy.”

However, Domenichini revealed that Napoli’s head coach Spalletti wasn’t well pleased with the performances of his team, though they won but he ‘reproached the players for something they hadn’t done.’

Domenichini said: “He was annoyed with a few players who didn’t do what they should’ve done. He was happy yes, but also reproached some players for things they hadn’t done.”

Napoli FC proceeded with their impressive start to the season, sitting pretty at the top of both the Serie A league table, alongside Atalanta and their UEFA Champions League group.