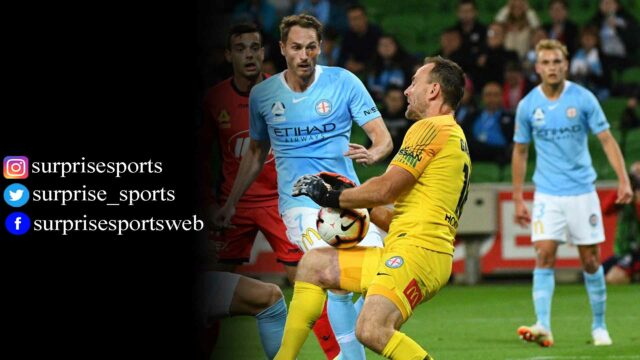 When and Where is Adelaide United vs. Melbourne City?

Adelaide United vs Melbourne City in the A-League semi-finals first leg is set to kick off at 7:05 pm AEST. It will be a home match for Adelaide United at Coopers Stadium.

The defending champions Melbourne City have been the most consistent team in the Australian A-League this season. They finished at the top of the table with 49 points from 26 matches and qualified for the semi-finals directly.

On the other hand, Adelaide United had to go through to the Eliminator to qualify for the semi-finals as they finished 4th in the table with 43 points from 26 matches. They beat Central Coast Mariners by 3-1 goals for a spot in the semi-finals.

Adelaide men have been in great form in recent matches. They have bagged 6 wins in their last 6 matches. Carl Veart’s men are coming into this semi-final tie from a fresh 3-1 goal win over Central Coast Mariners at home. They will hope to continue their winning run at home in the semi-final first leg against Melbourne City.

Melbourne City has suffered a dip in form in recent weeks. They have lost 2 and won 4 of their last 6 matches in the A-League. However, a 2-1 goal win over Wellington Phoenix in their last match will give them a lot of confidence for this semi-final away leg against Adelaide United.

Adelaide United and Melbourne City have gone head-to-head 3 times in the A-League this season. Two matches ended in draws, and Adelaide United won the latest one.

Adelaide United beat Melbourne City by 2-1 goals in February in an away match in their most recent meeting. The first half ended at 1-1 level as Jamie Maclaren scored for the home side and Javi Lopez pulled one back for Adelaide United. Mohamed Toure scored in the 85th minute to make it 1-2 in favor of Adelaide United.

Lachlan Barr suffered a groin injury last week. He will be unavailable in the first leg of the semi-final against Melbourne City. Mohamed Toure and Nick Ansell will also be unavailable for Adelaide United due to injury.

Melbourne City will miss Florin Berenguer and Aiden O’Neill due to injury. However, Curtis Goodwill will return and be available for selection in this match after serving the yellow card suspension.

How to Watch Adelaide United vs Melbourne City?

Fans can use Sky Sports, BT Sports, Channel 10, and other significant channels to watch Adelaide United vs Melbourne City on TV.

Fans can use ESPN, 10 Play, Paramount Plus, and other online live streaming platforms to live stream the match.

Everyone’s eyes will be on Jamie Maclaren for Melbourne City. This season, Jamie Maclaren is the top goalscorer with 15 goals in the A-League. Mathew Leckie will also be crucial alongside Jamie in the attack.

It should be challenging to beat Adelaide United in front of their home fans. The semi-finals will be completely different regardless of their recent forms, as both teams will give their very best.

It is going to be a close match. Our experts predict that the semi-final first leg between Adelaide United and Melbourne City should end in a 1-1 draw.

When is the 2nd Leg of the Semi-Final?