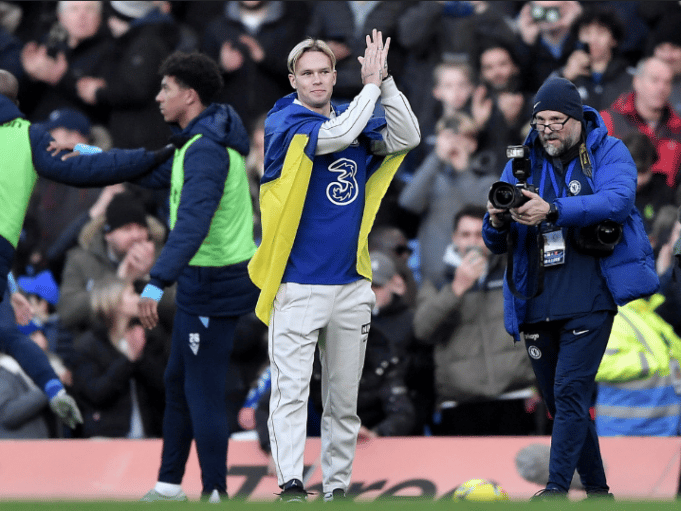 Rinat Akhmetov, the owner and president of Shakhtar Donetsk, gave more than £20 million to the Ukrainian war effort after selling Mykhaylo Mudryk to Chelsea.

Mudryk joined the Blues over the weekend in an £87 million transfer from Shakhtar after being pursued by Arsenal.

To outbid the Gunners in the January transfer window, Chelsea acted quickly and upped their offer for the 22-year-old winger.

The transfer money is a hefty compensation for Shakhtar, who resisted selling their star player at a lower price during talks with Arsenal.

The club, which has been forced to relocate from its Donetsk home as a result of the conflict with Russia, will experience a big boost as a result.

Akhmetov made a statement on Mudryk’s transfer on Monday morning in which he praised the Ukrainian army for repelling the Russian invaders.

The richest man in Ukraine, a 56-year-old mining tycoon, has taken advantage of the situation to start “an initiative geared to support Mariupol soldiers and the families of slain servicemen.”

“I am allocating $25 million (UAH 1 billion, £20 million) today to support our soldiers, defenders, and their families”, the president tweeted.

The funds will be utilized to satisfy a variety of requirements, including answering specific requests and providing medical and prosthetic treatment as well as psychological assistance.

According to Akhmetov, the continuous conflict with Russia made it “difficult” for Shakhtar to retain excellent players like Mudryk.

He expressed his belief that Ukraine would ultimately succeed in putting an end to Vladimir Putin’s immoral conflict, allowing Shakhtar to return to the Donbass Arena and play Chelsea in a friendly match.

Before their 1-0 victory against Crystal Palace on Sunday, Chelsea officially announced the acquisition of Mudryk.

A Ukraine flag was placed over the young man’s shoulders as he entered the field to a standing ovation. He did not miss the chance to address the crowd in front of an international audience.

Mudryk is the fifth player Chelsea has added during the January transfer window. He joins the club after Joao Felix, Andrey Santos, Benoit Badiashile, and David Datro Fofana.

Since Roman Abramovich sold the club to a group led by Todd Boehly in May, the Blues have spent more than £400 million on transfers.

Mudryk had only scored twice in 47 appearances for three different Ukrainian clubs before this season, but he elevated his profile in the Champions League by tallying three goals in six games for Shakhtar.

He might make his Premier League debut on Saturday at Anfield against Liverpool, who are one spot ahead of Chelsea in the standings.