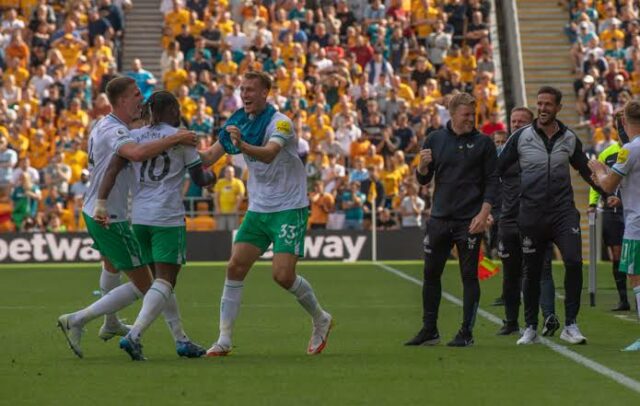 Allan Saint-maximin has won the Premier League goal of August award after his 90th-minute thunderbolt strike against Wolves was voted the best goal for the Month. In the other two awards, Erling Haaland of Manchester City grabbed the best player of the month award while Arsenal’s Mikel Arteta emerged as the best manager of the month.

Saint-Maximin saved the day for the Magpies with his brilliant technique as he picked a looping clearance from Wolves substitute Hee-Chan Hwang with a devastating and right-footed thunderbolt strike from 20 yards. Wolves goalkeeper Jose Sa was left with no chance.

Newcastle who had remained unbeaten was obviously heading for a first defeat of the season after a similarly great and fantastic long-range strike from Wolves midfielder Ruben Neves in the first half gave the hosts the lead.

Newcastle picked up the game with more stunning and brilliant buildup play but could not find an equalizer until late into the second half on the brink of regulation time. It was Saint-Maximin who came to save the day with his 90th-minute goal which leveled the game for the Magpies

Newcastle came close to grabbing all three points in the stoppage time, but Eliot Anderson missed the chance to effectively followed up a corner kick. Nevertheless, Saint-Maximum’s goal made waves as the French star delivered that stunning strike to secure a point for the Magpies.

Allan Saint-Maximin is a 25-year-old France international who had played for top clubs in French Ligue 1 before joining Newcastle United in 2019. The France winger has played for Saint Etienne, Monaco, and Nice before joining the Premier League. Since joining the Magpies, Allan had made 90 appearances for the club. His strike against Wolves was the 12th goal for Newcastle. He is yet to be called for France’s senior national team but has played at various levels of the French youth team.

The Premier League goal of the month is an association football award that recognizes the player who has scored the best goal of a given month of the season. The winner is chosen by a combination of an online public vote, which contributes to 10% of the final tally, and a panel of experts.

The nine monthly winners put forward at the end of the season for the Premier League Goal of the Season award, which will be chosen using the same method. The 2016–17 award was won by a goal from May, which did not go to a vote.

The Premier League goal of the month award was introduced in the 2016–17 season and is currently known by its sponsored name, the Budweiser Goal of the Month. While Andre Townsend is the first player to have won the award three times with three different clubs, former Chelsea star Pedro is the only player to have won the award multiple times in the same season. Newcastle United player Allan Saint-Maximin is the latest winner of the award for August 2022.