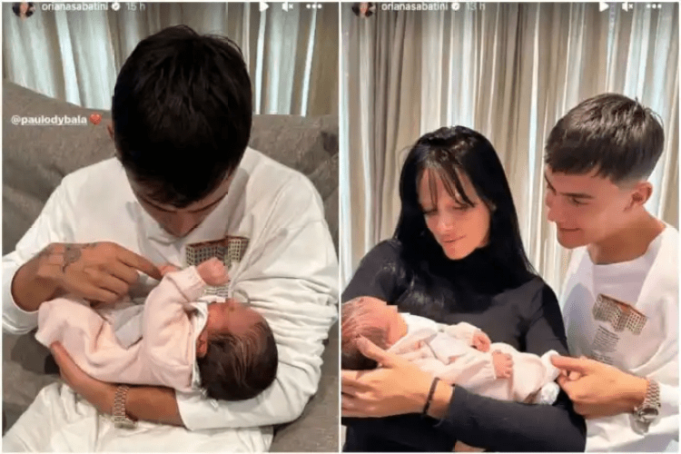 Paulo Dybala and Oriana Sabatini traveled to Spain to meet their fourth goddaughter, Bella, and were welcomed by Alvaro Morata and his wife, Alice Campello.

She was born on January 9th, 2023, and is the fourth child of Alvaro Morata AND Alice Campello.

Because of their close friendship, the couple wanted to give Morata’s daughter a special name.

Paulo Dybala has been selected as the girl’s godfather. After conquering his anxiety of his wife’s postpartum problems, Morata didn’t hesitate to have a friend like Dybala around him and his family.

Everything went well. They’re all home, as happy as ever after what the player has described as “the worst days of my life”.

The Roma star will baptize the little Bella with his partner, who was born three days ago. Alice Campello, who is in the hospital due to postpartum problems, received a message from the Argentine star on Instagram.

Bella was born on January 9 to the footballer and his wife. The pair revealed on social media that there were postpartum problems. “Alice is strong, and he is recovering little by little”, Morata announced on social media.

“She is currently receiving amazing medical care at the University of Navarra Clinic’s intensive care unit.”

Since then, they have been surrounded by so much love, notably from Paulo Dybala and his wife, Oriana Sabatini.

On Instagram, Joya also welcomed the infant with these words: “Welcome, Bella. We can’t wait to meet you.”

Due to their close friendship with Morata and Alice Campello, the Roma player and his partner will serve as the baby girl’s godfather and godmother.

“I can’t believe this little beauty was born, that I have the privilege to call goddaughter. You know how much I love you and how excited I am to be part of your life in such a beautiful moment like this,” the Roma star wrote.

They will be responsible for baptizing Bella.

Morata is the son of Susana Martn and Alfonso Morata. He was born in Madrid. Morata’s agent, Juanma López, is the footballer’s father.

Morata completely shaved his head in March 2014 to show his support for sick kids. He said, “Kids with cancer wanted to have my haircut but they couldn’t, so I gave myself theirs.”

His engagement to his Italian girlfriend Alice Campello took place on December 10, 2016, and they were married in Venice on June 17, 2017.

In honor of their twin sons Alessandro and Leonardo, who were born on July 29, 2018, the footballer at Chelsea altered his uniform number from 9 to 29.

Paulo Dybala, a star from Argentina, went to see American singer Ariana Grande perform in concert in 2017. Grande had a supporting role in the tour.

The Argentinian soccer player was already well-known at Juventus at the time, and it was there that he also met his future wife.

Both of them realized they were genuinely in love after spending time together and going on dates.

She remained faithful to her lover, supporting him in all his endeavors.

For a while, they kept their relationship a secret, but in 2018, they went public with it.

Since then, they haven’t been able to be apart, demonstrating that their relationship can withstand the test of time.

They have a strong sense of mutual respect and trust in each other’s opinions, therefore they rarely dispute.