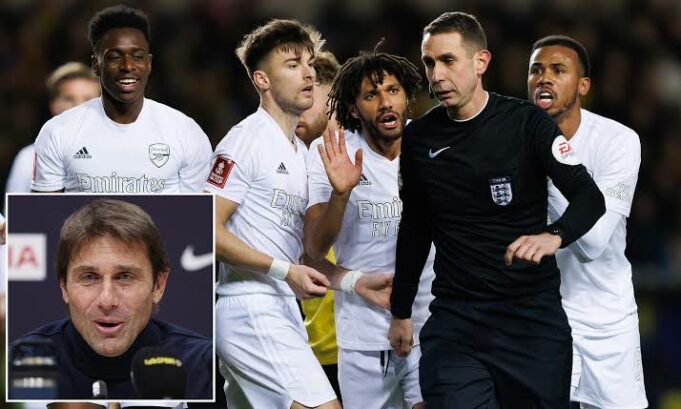 Tottenham boss Antonio Conte has hit out at the surging levels of disrespect shown by players toward officials ahead of the north London derby on Sunday, January 15.

Tottenham will host the Premier League leaders, Arsenal on Sunday in a match where excitement usually runs high with each team manager prone to err out of passion.

Spur manager, Antonio Conte was questioned in a pre-match interview on Friday if he had any troubles over the behavior of Arsenal given they have been charged by the FA for failing to control their players in their last two outings against Newcastle and Oxford United.

However, Antonio Conte did not relate his response directly to Arsenal knowing that Mikel Arteta’s Gunners team stand accused by the FA of failing to control his players in recent games against Newcastle and Oxford.

Arsenal boss Mikel Arteta was criticized when he lost his cool on the touchline as Arsenal saw two late penalty appeals denied during a goalless draw against Newcastle.

Arteta also failed to control his boys who were disrespectful toward the referee when another penalty appeal was dismissed in their clash against Oxford United on Monday.

Conte, however, decided to call on both Tottenham and Arsenal to be respectful to this weekend’s referee Craig Pawson after uttering his hatred for players that try to intimidate match officials.

Conte said: ”In an important game like this, respect is always at the top,’ said Conte. You have to show respect in every situation and especially with the referee because I know very well the difficulty of being a referee, to take decisions.”

“To intimidate or to create a bad atmosphere is not fair. I don’t like this. I hate the people that try to do it.”

While Tottenham boss Conte wants both teams to show respect on the pitch, he admitted that the touchline will accommodate two club managers who usually show passion for the game.

Like Mikel Arteta, Antonio Conte has a reputation as a fiery touchline manager and was sent off the pitch earlier this season when VAR intervention ruled out a Tottenham goal in the Champions League clash against Sporting Lisbon.

Conte added: ”Everyone tries to live the situation in the way they like to live.”

”Arteta is another coach who shows his passion and transfers this to his players on the pitch. But honestly, I see a lot of coaches involved during the game because now our job became really difficult.”

”To see a coach stay sitting on the bench is very difficult. Arteta is a coach like me. We show our passion. What happens on the pitch is in the moment, the emotion, and nothing can prepare your mind for this.”

”For this reason, sometimes you can celebrate strangely. This passion is pure.”
”Don’t forget that we are talking always about a game of football.”

Tottenham boss, Antonio Conte further admitted that he may be a furious football manager who gets enraged out of passion but he will never disrespect any referee.

Tottenham boss concluded: ”I was really upset but I never, never lacked the respect of the referee. In every moment you have to show respect.”

Mikel Arteta’s Gunners will come into the north London derby five points clear at the top of the Premier League, having lost just one of their 17 matches this season.

Meanwhile, Tottenham have played a game more and are 11 points behind in fifth place following their 4-0 victory over Crystal Palace.

Tottenham look set to be boosted by the return of Dejan Kulusevski for Sunday’s Premier League encounter.

The Swedish forward has missed Spur’s last three matches with a minor muscle injury but he’s fully back to fitness to face Arsenal on Sunday.