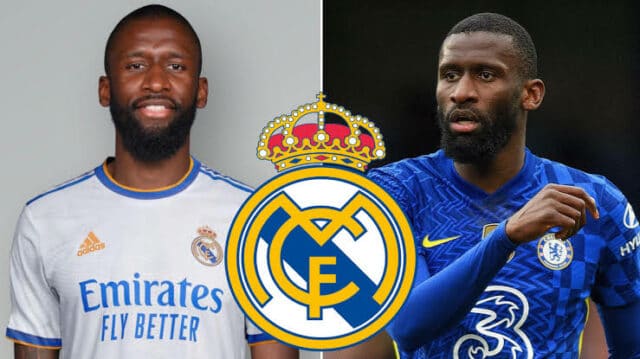 The 29-year-old German national team player joined the UEFA Champions League holders this summer on the 2nd of June 2022, as a free agent, signing a four-year deal with the club.

Before his transition from Chelsea, Antonio Rudiger had, initially wanted to extend his five-year contract with the London club but Chelsea was unable to offer him a new deal due to the terms of the license the Blues were forced to operate following the United Kingdom’s ruling to sanction the previous Chelsea owner Roman Abramovich.

Meanwhile, the 29-year-old Madrid center-back revealed he thought about his move from Chelsea and concluded in his mind that there was never a third option; he was only interested in staying at Stamford Bridge or moving to Los Blancos.

Rudiger said: “There were only two options for me: either I stay at Chelsea or I go to Real. Germany was not a serious prospect.

“At the end of April, it [a move to Real Madrid] became really concrete. But before everything was clear, my brother fooled me a bit.

“We played with Chelsea against Real in the quarter-finals of the Champions League. After the first-leg defeat, he suddenly said to me: ‘Toni, I don’t know if this will still work. In the second leg, you have to show everything so that the change works.’ My head was shattered, but that spurred me on.”

Since he arrived at Santiago Bernabeu, Antonio Rudiger has played only four games so far for his new club, however, Rudiger admits that he has never experienced such a distinctive tutelage of Carlo Ancelotti before in his career.

Even though Rudiger joined Madrid this summer and has not played under the Italian coach for long, the 29-year-old defender has already had luminous remarks for Ancelotti and the way he treats his players at Real Madrid.

Coach Carlo Ancelotti is famous for his tactics and inflexible coaching style, with the ability to uncover the qualities in his players and use them in their best positions.

The Italian coach returned to Real Madrid in the summer of 2021 after coaching the club in 2013 and went on to win the 2021/22 La Liga and UEFA Champions League titles for Madrid.

In a recent interview with German outlet ‘Sport1’, Rudiger revealed how Ancelotti gave him and his family a surprise home visit immediately after he joined the Spanish club.

Rudiger said: “I had only been in our new house with my family for a few hours – we were just barbecuing – and the doorbell suddenly rang.

“I opened it and Carlo Ancelotti was just standing in front of me. A wow moment. He sat down at the table with us, ate with us and got to know my family.
‘Very normal, very down-to-earth. He was there for two hours, we talked about everything.

“I’ll be honest, I’ve never experienced anything like it, no coach has ever done something like that for me. After the few months with him.”

He described the Italian manager as untouchable and a great achiever who has been winning Champions Leagues titles even when he, was a toddler.

Rudiger continued: “I have to say: When it comes to dealing with players, Ancelotti is untouchable. Stop Don Carlo, a coaching legend – he already collected Champions League titles when I was a child.

“Working with him every day now and at the most successful club in the world is wonderful.”

When he was asked who his role model is among famous defenders in the world, Rudiger mentioned Real Madrid legend Pepe.

The Portuguese and formal Real Madrid star Pepe was famous for his speed, assertiveness, strength, tenacious defense, and hard-tackling style of play.

Rudiger told German Sport1 that he longed to be like Pepe, he develops his defensive skills and how to pin opponents down by studying Pepe’s movement on the pitch.

He said: “Pepe was my great model at Real Madrid, I always wanted to be like him. I used to watch videos of him straddling his opponents.”

Antonio Rudiger is no doubt one of the best defenders in the world. Moreover, examining both Pepe and Rudiger, one would imply that Rudiger is a good observant as he shares the same defensive qualities as Pepe.

Rudiger is a famous versatile defender, who is also capable of playing as a full-back on either flank. He is mostly referred to as a “tough tackler” and a “commanding presence in the air” at Chelsea.

The 29-year-old is also popular for his strong physical attributes, aggressive playing style, leadership qualities, and passing accuracy. Interestingly, the German international can also score goals which makes him a complete modern-day defender.