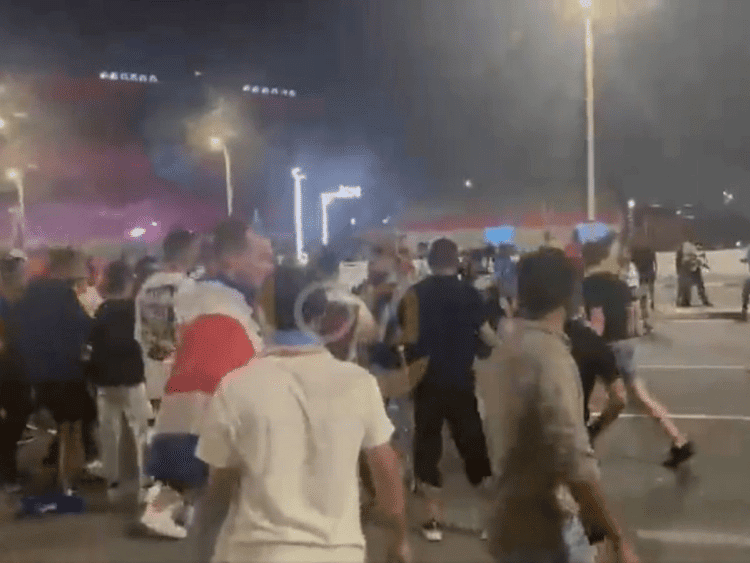 Argentina and Mexico fans clashed in Qatar on Wednesday night after chants of “fu*k Messi” were heard from the rival crowd.

At the Al Bidda Park in Doha, one of FIFA’s fan zones in the Qatari capital that is intended to encourage different teams to come together and mingle, rival groups of fans wearing their countries’ uniforms got into a brief altercation.

There are reports that the altercation caused minor injuries to several people.

The unpleasant incident occurred just one day after Argentina, one of the tournament favorites, lost their opening World Cup match to Saudi Arabia in a shocking upset. Messi put the South American country ahead with a controversial penalty kick goal, but his team was rocked by two goals in the second half.

Salah Al-Shehri and Salem Al-Dawsari scored two goals to turn the game around early in the second half. Argentina completely lost their composure as Saudi Arabia scored on each of their two shots on goal.

Argentina and Mexico’s matchup on Saturday night is likely to be important for both teams; a loss for either side would put them in danger of being eliminated with one round of games remaining, while a victory would change the course of both tournaments.

On Wednesday night, unpleasant incidents between fan groups put the tensions on display.

Even if the violent incident was a one-off, it is a sign of how tense things will be ahead of Argentina Vs Mexico clash. Futballnews gathered that the altercations between supporters started when some Mexico fans started chanting “screw Messi.”

After his team’s loss to Saudi Arabia in his final World Cup match, Messi expressed his regret to reporters: “In five minutes of errors we lost the lead and found ourselves 1-2 down. We messed up, we threw crosses into the box and the game became a little complicated. I had never suffered such a hard blow with this group of players. Things happen for a reason. Now, obviously, we have to win or win (to get through the group).”

Related
Cristiano Ronaldo Brings Lisbon To A Halt As A £500,000 Fleet Of Supercars Were Shipped To Portugal Following Manchester United's Fallout

Argentina’s opening loss, which ended their streak of 36 games without a loss, will be remembered as one of the biggest upsets in World Cup history, ranking right up there with their defeat by Cameroon in the tournament’s opening match in 1990.

Why did Argentina and Mexican fans clash?

The unpleasant incidents happened just one day after Argentina suffered one of the greatest World Cup upsets ever, losing to Saudi Arabia 2-1.

One of the pre-tournament favorites, Lionel Messi’s team appeared to be headed for a routine opening victory when the PSG forward scored from the penalty spot.

However, Salah Al-Shehri and Salem Al-Dawsari’s goals in the second half helped the Saudis turn the match around, making Saturday’s match against Mexico even more crucial.

Both teams would be in danger of being eliminated after a loss.

A video that was released on Twitter depicts groups of supporters fighting, with some of them kicking and punching their opponents.

Another Saudi fan gained notoriety for interrupting a Korean TV reporter outside the stadium and posing the following query: “Excuse me, where is Messi?”

A second supporter joins in and queries: “Can I ask you a question? Ask all the 88,000, where is Messi?”

The 35-year-old has previously acknowledged that Qatar is probably going to be his last World Cup as a player.

The shock of Argentina’s initial loss was increased by the fact that it ended a winning streak dating back to July 2019.

Brazilian supporters have also expressed how happy they are about their country’s South American rivals’ loss.

Several Brazilian fans were caught on camera waving the green Saudi flag during their match against Serbia on Thursday night.