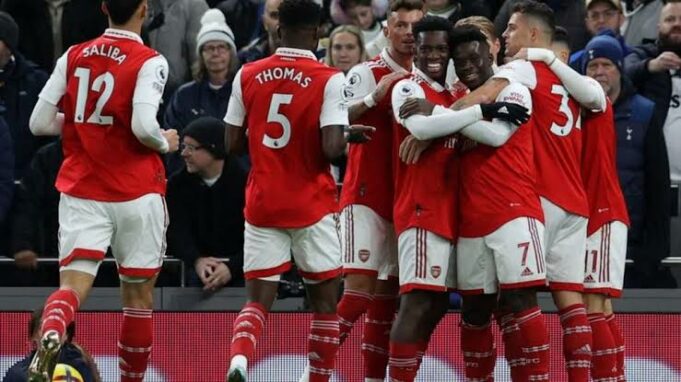 With an amazing performance and victory in the north London derby at Tottenham, the Gunners widened their advantage at the top of the Premier League to a commanding eight points.

With an outstanding display of elegance in the first half and tenacity after the break, the Gunners fully capitalized on Manchester City’s defeat at Manchester United on Saturday to secure a crucial three points.

Hugo Lloris’ appalling own goal and Martin Odegaard’s outstanding finish were enough to guarantee that the league leaders would return to the Emirates with all three points.

In the second half, the home team had a few opportunities to lessen the lead, but Mikel Arteta’s team gave them no chance.

Arsenal was the superior team from the opening minute, and it didn’t take them long to take the lead.

Within a quarter-hour, Lloris managed to spill a rather uninspiring Bukayo Saka cross outside of his own penalty area.

When the goal went in, Tottenham crumbled, and another Arsenal goal seemed inevitable.

After Odegaard’s powerful shot was saved by Lloris and Thomas Partey’s effort hit the woodwork, the visitors’ captain gave the opposition captain no chance.

To give his team a well-earned two-goal lead, he went into plenty of space 25 yards from goal before unleashing a flawless low strike into the bottom corner.

There was no chance of Tottenham being saved once more by their second-half performance, thanks to Aaron Ramsdale.

To keep his clean sheet and help Arsenal extend their lead at the top of the Premier League by another three points, he made two outstanding saves, the first from Ryan Sessegnon and the second from Harry Kane.

Related
Revealed! Gerard Pique Tried to Reconcile And Win Back Shakira After Split

There was a problem close to Ramsdale’s goal as Pawson blew his whistle to signify the end of the game.

The Arsenal goalie was the target of a barrage of taunts from the home crowd, and a few of them appeared ready to charge the field of play.

They have seized the chance to widen their margin of victory at the top of the Premier League and would look to keep it that way.

The Gunners will have another big challenge on the Premier League table as they host Manchester United on the 22nd of January at the Emirates.

Anyone able to prevent them from winning the Premier League? I’m not certain.