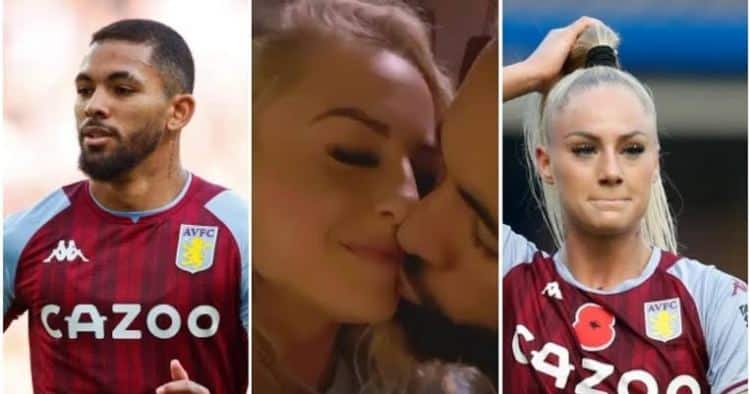 Douglas Luiz of Aston Villa has reportedly broken up with his footballer girlfriend Alisha Lehmann after a row.

Alisha, 23, who plays for Aston Villa’s women’s team, had been in a relationship with the Douglas Luiz for a year.

The two footballers reportedly met at a club in Birmingham, England where their romantic relationship began.

The two Aston Villa players saw their affection for each other grow and blazed at the initial stages of the relationship.

In January this year, Alisha gave up her rented penthouse apartment to move into Douglas’ £1.5million five-bed house in Sutton Coldfield, Birmingham.

Shockingly, they had reportedly broken up following heated arguments over Alisha’s raunchy calendar.

The Swiss star, who plays as a forward for the Aston Villa women’s team, is now staying with a team-mate following the break-up.

A source close to the former lovers has confirmed that Douglas was completely swept off his feet at the club in Birmingham when the beautiful blonde first arrived.

He quickly asked her out and they became a footballing power couple and were so loved up.

However, things turned for the worst when Alisha became more in demand off the pitch, and the duo could not move on smoothly together as before, with the wear in the relationship becoming evident.

According to reports, although Alisha was not happy, she was eager to do a calendar when asked and had jumped at the idea of showing off her sexy body.

Douglas Luiz was said to be uncomfortable with Alisha’s exhibitionist and raunchy calendar, saying she should not have done that.

Alisha, on the other hand, did not yield and is said to have vehemently opposed her lover, building on the already evident cracks in the relationship.

As the row continued, Alisha, who is also a bisexual is said to have opted out of the relationship and left Douglas Luiz to stay with her teammate.

Before this break-up, Alisha is said to have been in a relationship with a 25-year-old fellow Swiss teammate, Ramona Bachmann.

Meanwhile, his ex-lover and Brazil international Douglas is currently back in Brazil after Alisha left him, moving out of a £1.5million house in Birmingham.

A source suggested that Alisha jumped at the chance to show off her sexy side and cared little about her lover’s opinion.

A spokeswoman for Alisha, who was contacted to comment on the state of the relationship, has reportedly refused to comment.

Douglas Luiz Soares de Paulo (born 9 May 1998), known as Douglas Luiz, is a Brazilian professional footballer who plays as a defensive midfielder for Premier League club Aston Villa and the Brazil national team.

Manchester City signed Douglas Luiz at the age of nineteen in 2017, but was unable to feature for the Citizens due to the inability to process his his work permit.

He was then loaned out Girona two times before Aston Villa signed him in 2019. He won the Olympic Gold with Brazil Men’s Olympic team in 2020.

Alisha Lehmann (born 21 January 1999) is a Swiss professional footballer who plays as a forward for English FA WSL club Aston Villa and the Switzerland national team.

Alisha had played for BSC YB Frauen of the Nationalliga A, West Ham United of the FA WSL and on loan with Everton of the FA WSL.

Lehmann joined Aston Villa in July 2022 and has signed a one-year contract extension with Aston Villa for the 2022–23 season.

She has made 23 appearances and scored four goals during her first season at the club.