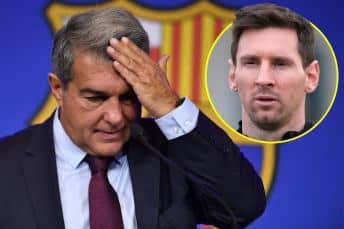 Barcelona have threatened a lawsuit after details of the club’s contract extension talks with former player Lionel Messi were leaked. A Spanish newspaper, El Mundo, released details of what transpired between the La Liga giants and their former star Lionel Messi.

El Mundo, a Spanish newspaper, has stoked tensions after it released detailed information about what took place between La Liga giants Barcelona and Lionel Messi in their bid to extend the contract of the Argentine and legendary playmaker.

It should be recalled that Lionel Messi finally exited Camp Nou amid tensions, with La Liga, Barcelona, and the Financial Fair Play Rule all coming into play.

Emotions were high as Lionel Messi finally waved goodbye to a club he had made a home and hoped to finish his football career.

Messi emerged as one of the world’s most decorated football stars in Barcelona, raking trophies, including individual awards

Messi became the first player in football history to win the Ballon d ‘Or six times and has won it three consecutive times at Barcelona.

Nevertheless, his glorious spell with the Spanish giants ended in the most unbecoming circumstances. Messi finally parted ways with Barcelona and headed to France, where he struggled to adapt to French Ligue 1 in Paris Saint Germane.

Far beyond what was displayed on and shared on the media during Lionel Messi’s exit to PSG, leaked details of what actually took place behind closed doors before Messi left Camp Nou has added another twist to the exit story.

From the report obtained from Jorge Mendes, Josep Mario Bartomeu (then President), Oscar Grau (then CEO), and Lionel Messi’s father, Messi had demanded a private jet from Barcelona and also made a special request for his friend and fellow South American Luis Suarez as part of his contract extension agreement.

The report indicated that Barcelona accepted all the requests laid out by the Argentine except one – his release clause.

Barcelona had placed a whooping €700 million bounty on Lionel Messi, but the Argentine wanted it to be reduced to an amount most pundits consider to be symbolic – €10 million.

Evidently, the highly-rated Argentine playmaker wanted to hit Camp Nou’s exit door at ease without any constraint. Despite Barcelona’s rejection, the reality played out just months after.

Also added to Messi’s request list was a private jet that he and his family will fly with to and fro Argentina on Christmas Holiday.

He also wanted a €10m signing on bonus before agreeing on a new deal and wanted to recover the wage cut he had accepted during the pandemic with an additional interest of three percent.

A 20 percent fixed salary reduction in the 2020/21 campaign is to be increased by two separate increases of 10 percent across the next two seasons, with the interest rate also included in the list.

In one of the emails sent by Messi’s father to Alfonso Nebot, director of the office that manages Messi’s wealth, he wrote, “As the talks broke down, let them feel the weight of the sword on their head.”

After the face-off due to stalled contract extension talks, Messi demanded that he wanted to leave.

Barcelona has threatened legal action after El Mundo leaked the details of the uneasy relations and face-off between Messi and the club. A statement by the club reads:

“In relation to the information published in El Mundo under the title ‘Barca Leaks, the club’s secret files’, Barcelona express indignation at the intentional leaking of information that is part of a legal process.

“The club regrets that the media in question boasts of having ‘access to a huge number of documents and emails that are part of the Barcagate investigation’ when this information is yet to be shared.

“In any case, the article in question makes public documents that have nothing to do with the ongoing case and their use is an affront to the reputation and confidentiality of the club. For that reason, and with the aim of protecting Barcelona’s rights, the club’s legal department are studying the legal measures that need to be taken.”