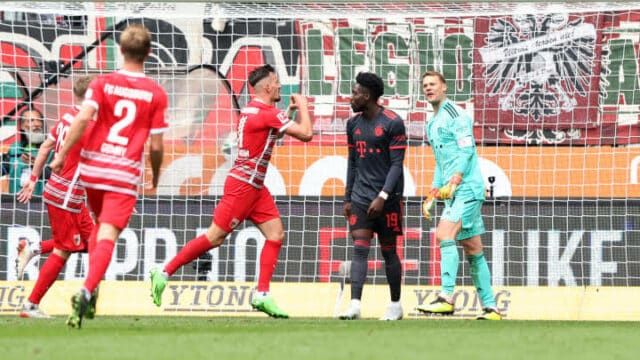 For the fourth strainght match, Bayern Munich has failed to secure a win in their Bundesliga title race this season.

The Bundesliga champions’ winless spell has sprawled to four Bundesliga games after a shocking 1-0 loss to Augsburg on Saturday, September 16, 2022.

Since the German giants defeated Bochum 7-0 on August 21, 2022, the defending Bundesliga champions have been without a victory in the top division.

FC Bayern Munich has slumped in their surging form after three consecutive draws in the Bundesliga matches this season before meeting their first defeat in the league season.

Augsburg gave the German giants a difficult night at WWK Arena on Saturday, September 16, as they showed Bayern no reverence after the Nagelsmann’s side defeated Barcelona 2-0 at Allianz Arena in their Champions League clash on Tuesday, September 13, 2022.

The host had plenty of chances than Bayern as they made seven shots on goal in the first half, more than double Bayern Munich’s tally.

The Bundesliga Champions side was dormant, wielding only a few half-chances, with the likes of Sadio Mane and Leroy Sane failing to convert their chances competently.

The wonderful moment arrived for Augsburg after Mergim Berisha converted a brilliant assist from Lago to give Enrico Maassen’s team the victory over their Bavarian giants in the 59th minute of the second half.

Bayern Munich struggled to get the equalizer as they dominated in ball possession, having 7 shots on target through several chances, including a Manuel Neuer header at an added time, but all proved abortive as Augsburg’s goalkeeper, Rafal Gikiewicz’s outstanding performance impeded Bayern from getting the equalizer.

After the match, Bayern’s forward Thomas Muller revealed that the defeat came as a shock for the German giants.

Hassan commented on the poor performance the Bundesliga Champions exhibited against Augsburg, implying that Bayern can not win the Bundesliga title if they continue in that horrible play style.

Related
Darwin Nunez: Net worth, Salary, Stats, Girlfriend, and all you need to know

Hassan said: “The way we played today, you can’t win games in the Bundesliga.”

Meanwhile, the away match against Augsburg is Bayern Munich’s fourth consecutive Bundesliga game without a win, their longest winless run since under coach Giovanni Trappatoni in the late 1990s.

Moreover, with 12 points, Bayern sit in fourth place in the Bundesliga table, while Dortmund occupy the first position with 15 points.

With the victory over Bayern, Augsburg moves up three spots to 11th position with 9 points, securing their place in the middle of the table.

Bayern Munich next game in the Bundesliga is against Leverkusen on Friday, September 30, 2022. A defeat in that game could spell doom to the club’s hope of retaining the German title this season.