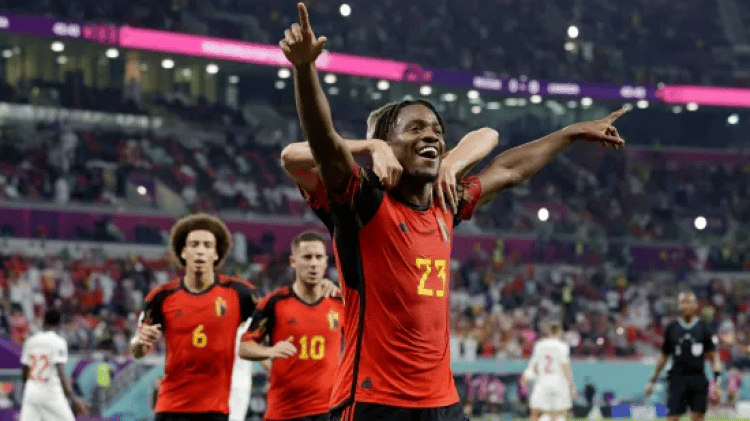 Belgium edged Canada 1-0 in their World Cup 2022 opener in Qatar as Michy Batshuayi scored the only goal of the game.

Thibaut Courtois stopped an Alphonso Davies penalty in the 11th minute, and Canada missed a number of other opportunities as they attempted 22 shots to Belgium’s three.

However, on the cusp of halftime, Batshuayi punished them, and Roberto Martinez’s team hung on to secure the maximum three points to boost their chances of making it out of Group F.

As a result, the Red Devils now lead Group F after the first round of games, with Croatia and Morocco level on one point after their 0-0 stalemate earlier on Wednesday.

Due to Yannick Carrasco’s handball at a corner in the 13th minute, Canada had the opportunity to take the lead from the penalty spot and troubled Belgium’s sluggish backline.

Alphonso Davies stepped up to the plate, but Thibaut Courtois made the save with a low dive to his right.

When Richie Laryea was brought down in the area by Axel Witsel’s challenge in the 39th minute, Canada continued to apply pressure and had a penalty call reviewed by VAR, but it was determined that there was no penalty.

Belgium seized the lead against the flow of play two minutes before halftime thanks to Batshuayi.

He pounced on Toby Alderweireld’s optimistic long pass and slammed his shot into the bottom corner.

The second half was a scrappy affair, with Belgium eager to seize any chance to thwart Canada’s quick attack.

Despite having many shots on goal, Canada lacked decisiveness. Jonathan David’s free header in the 49th minute was their best chance to tie the score. However, it went beyond the crossbar.

In place of Cyle With ten minutes remaining in the regular time period, Larin also had an excellent opportunity to tie the score, but Courtois saved his weak header from close range.

Against Canada, who had 22 shots on goal as opposed to Belgium’s seven, the Belgian side occasionally relied on luck.

The pace of Canada’s assault was difficult for veterans Toby Alderweireld and Jan Vertonghen to handle, and the final score may have been quite different had Alphonso Davies successfully converted a first-half penalty.

In the first half, the Canada wingback often took advantage of the space left between Yannick Carrasco and Jan Vertonghen, forcing Martinez to substitute the Atletico Madrid midfielder.

Midway through the second half, he made a critical block to prevent Batshuayi from launching a goal-bound effort, as his pace and deliveries into the box occasionally overpowered Belgium.

Although Roberto Martinez’s team appeared to be a creakier one than the one that advanced to the 2018 World Cup semifinals, Belgium did earn the three points they required, and Morocco and Croatia will both enjoy their chances against them.