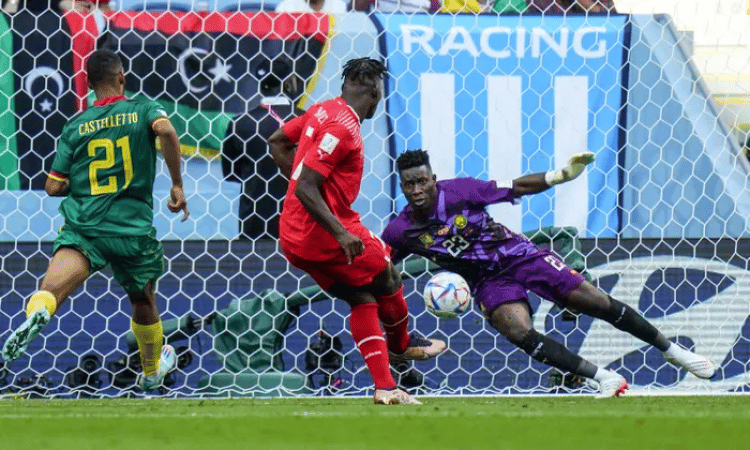 Switzerland defeated Cameroon 1-0 in their World Cup Group G match on Thursday at the Al Janoub Stadium, thanks to a lone goal from Breel Embolo.

After 48 minutes, Breel Embolo, a forward for Ligue 1 club Monaco, swept in a low cross from Xherdan Shaqiri and then remained motionless, a rueful grimace on his face, as his teammates applauded all around him.

Note that the 25-year-old forward was raised in Basel while being a Yaounde native. Hence, he scored against his country of origin.

Before and after the lone goal, Karl Toko Ekambi, Eric-Maxim Choupo-Moting, and Martin Hongla all squandered excellent chances against a lackluster Switzerland team that struggled to get out of first gear. Hence, Cameroon was the superior team in the first half and deserved to have taken the lead.

However, the Swiss significantly improved in the second half and took the lead on a well-executed goal by Breel Embolo.

As Cameroon lost momentum, Ruben Vargas had a great opportunity to score a second goal but was denied by keeper Andre Onana.

Breel Embolo’s goal was what set the two countries apart. The African team was broken by the man from Cameroon, a defeat that might make Cameroon’s survival in the World Cup group extremely challenging.

In the close game, Switzerland used all of their expertise which carried them to a well-deserved victory over the African team.

While Cameroon is back in the World Cup after missing the 2018 edition, the Swiss are attempting to win their third consecutive group stage.

Who would have the best opportunity to qualify from the group felt very essential in this game.

It appeared to be a close battle between Serbia, Switzerland, and Cameroon, with Brazil predicted to be one of the two teams moving on.

With Cameroon facing Brazil next and now needing points, Switzerland is in the lead.

Brazil will play Serbia tonight. The key game might be Brazil’s opportunity to matchup with Switzerland.

In some respects, Switzerland’s 1-0 victory over Cameroon was the ideal way to open their World Cup campaign.

The Swiss have three points going into their match against Brazil and don’t need a surprise victory over the tournament favorites to maintain their chances of making it to the knockout round, if Brazil beat Serbia and Cameroon.

Indeed, it was a laborious victory for Switzerland; Cameroon was the superior team in the first half and unlucky not to have taken the lead at the interval before their European opponents struck through Breel Embolo, a Cameroonian, early in the second period, and then suffocated the game.

No one could reasonably contest that the Swiss assault was operating at peak efficiency, but Granit Xhaka is the key to releasing their full potential.

The captain, who recently earned his 107th cap, has been an integral part of the team since his debut in 2011, as evidenced by the fact that he played every minute of their most recent Nations League campaign.

However, in order for them to become serious contenders, he needs to take on a different role.

The two teams engaged in an entertaining match, but Cameroon will be left to regret the chances they wasted in the first half when they posed the larger threat.

Switzerland delivered a measured, controlled performance. Although they weren’t particularly impressive, they maintained their composure, made the breakthrough, and then really managed the game.